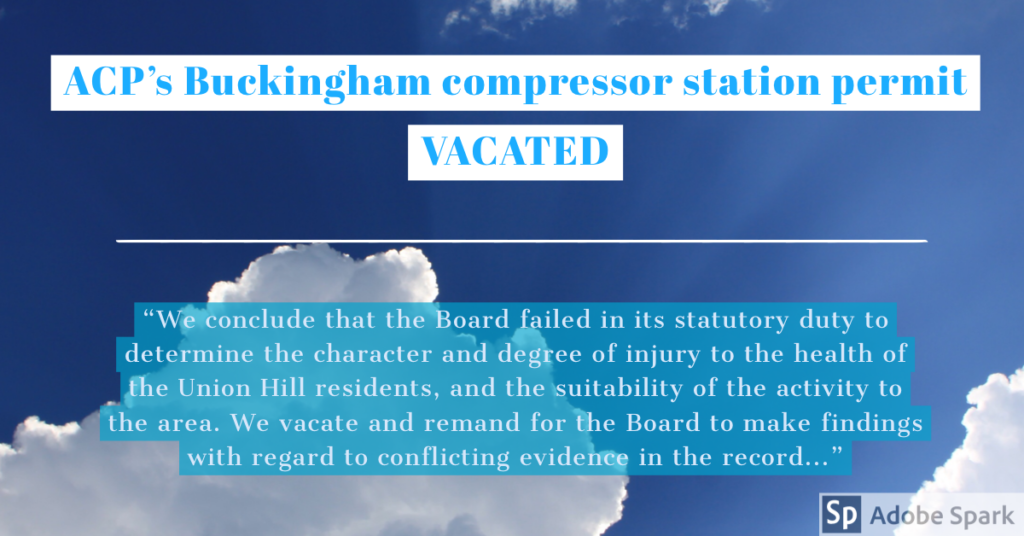 On January 7, 2020, the Fourth Circuit Court of Appeals vacated the air permit for the Atlantic Coast Pipeline’s Buckingham compressor station located in Virginia’s historic, predominantly African-American Union Hill community. The air permit was granted last January by the Virginia Air Pollution Control Board. The suit challenging the permit had been brought by Friends of Buckingham (represented by the Southern Environmental Law Center) and the Chesapeake Bay Foundation. In the 3-0 opinion written by Judge Thacker, the Court remanded the permit to the Air Board for further deliberation on two grounds, as noted in these excerpts from the opinion:

We congratulate Friends of Buckingham, the Southern Environmental Law Center (SELC) which represented them, and the Chesapeake Bay Foundation on the years of hard work which brought about this favorable ruling.

A copy of the Fourth Circuit’s full opinion is here.

A press release from SELC says in part, “The decision marks the eighth time since May 2018 that a federal court or the federal agencies themselves have revoked or suspended Atlantic Coast Pipeline permits. As a result, pipeline builders Dominion and Duke shut down all construction more than a year ago with less than 6% of the project in the ground.  The future of this risky and highly controversial pipeline is uncertain. Developers must evaluate alternative routes that avoid two national forests—potentially redrawing significant portions of their proposal—in order to comply with an earlier court decision. And more than five years after the pipeline was first announced, new evidence makes it apparent that the project is excessively costly and unnecessary.  ‘For the Atlantic Coast Pipeline, it’s the same story again and again,’ said Greg Buppert, senior attorney at the Southern Environmental Law Center. ‘Dominion tried to force a pipeline compressor station into a community where it didn’t belong, just like it has tried to force the pipeline through a national park, national forests, and steep mountains. But the people of Union Hill never backed down. Today they’ve won an important victory, not just for themselves, but for every community in Virginia facing the unjust burden of industry and pollution.'”

The opinion specifies a number of difficult issues the Air Board must resolve before reissuing the permit.  Wild Virginia’s David Sligh commented, “The court found that the Virginia Department of Environmental Quality and the State Air Pollution Control Board failed to do their jobs. Officials in these agencies refused to adequately analyze whether the compressor station would have disproportionate impacts on the largely minority community around it (it would). As the court stated: “environmental justice is not merely a box to be checked.” Agency officials refused to acknowledge reliable demographic information supplied by citizens or to collect their own. Instead, they relied on flawed sources that even they admitted were unreliable. Our public officials also refused to look at whether the station should be powered by electric motors versus gas and, therefore, create less pollution and risk to residents’ health. The officials tried to explain this failure by citing a federal rule that clearly does not apply and then a state rule that the court said does not exist.”

Richmond Times Dispatch coverage of the story is here (including a photo at the January 2019 Air Board hearing with Friends of Nelson Board members in the audience).  The Court’s ruling was widely covered in local, regional, and national media outlets, including the Washington Post and the New York Times.