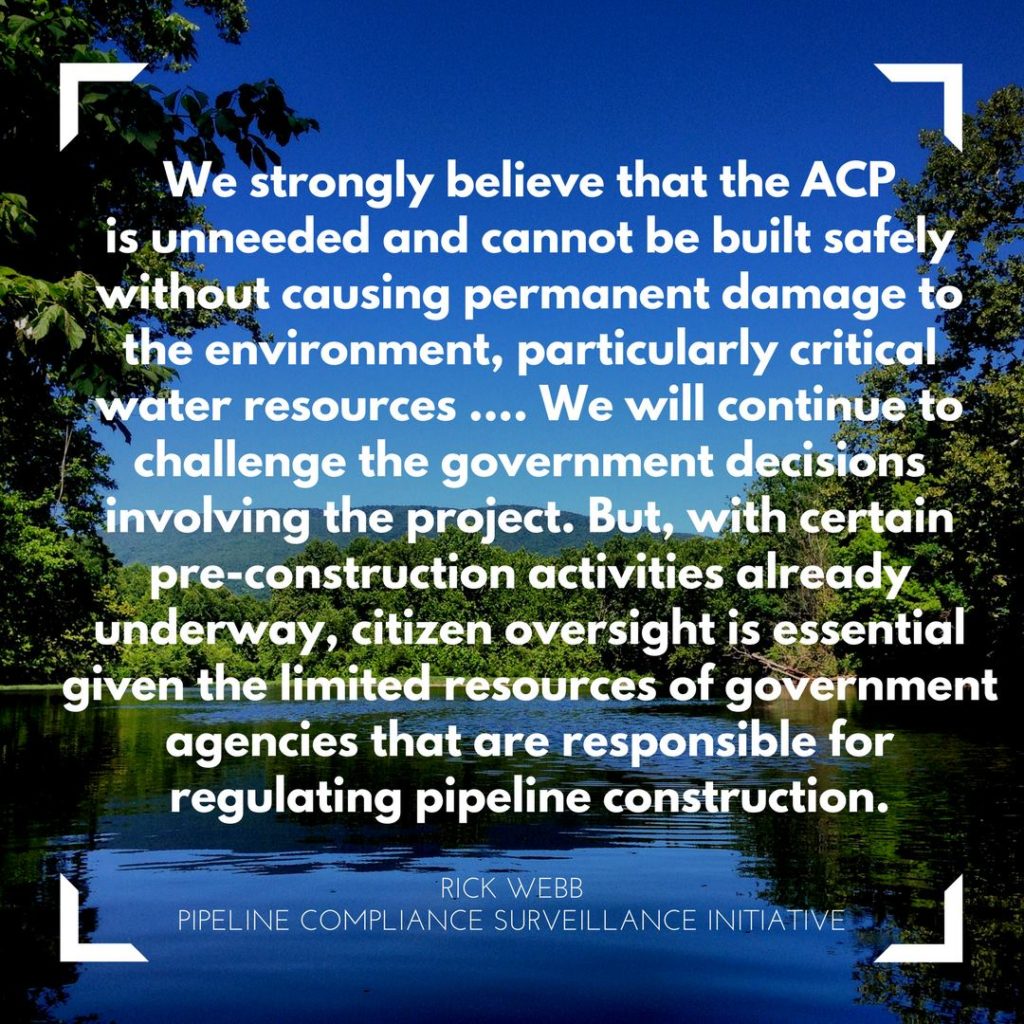 Allegheny-Blue Ridge Alliance announced on January 22, 2018, the launching of the Pipeline Compliance Surveillance Initiative (Pipeline CSI) to monitor construction activities of the Atlantic Coast Pipeline. A copy of the press release sent to media in Virginia, West Virginia and North Carolina is reproduced below.

Additional details about Pipeline CSI, including how persons in ABRA member organizations can become involved, will be forthcoming over the next couple of weeks.

A citizen initiative to monitor construction activities of the Atlantic Coast Pipeline (ACP) is being launched today by the Allegheny-Blue Ridge Alliance (ABRA), a coalition of over 50 organizations in Virginia and West Virginia. The objective of the Pipeline Compliance Surveillance Initiative (Pipeline CSI) is to ensure strict application of environmental laws and regulations for the ACP.

“We strongly believe that the ACP is unneeded and cannot be built safely without causing permanent damage to the environment, particularly critical water resources,” stated Rick Webb of the Dominion Pipeline Monitoring Coalition, who is chairing the development of the new ABRA program. “We will continue to challenge the government decisions involving the project. But, with certain pre-construction activities already underway, citizen oversight is essential given the limited resources of government agencies that are responsible for regulating pipeline construction.”

Continuing, Webb said “the need for citizen oversight of pipeline construction has been made clear by observations of recent pipeline projects and ineffective government agency response to repeated violations and water resource harm. We have no reason to expect more from the agencies during construction of the ACP, given their failure to require submission of complete environmental plans prior to project approval. This deferral of critical review and analysis sets the stage for significant and long-term degradation of high-quality streams and groundwater supplies.”

The Pipeline CSI is gathering in-depth data and assessing the landscape the ACP is proposed to cross to fill in information gaps in official records. The effort will involve hundreds of volunteer observers in Virginia and West Virginia. The program will include extensive water quality monitoring and aerial reconnaissance. Initial phases of the Pipeline CSI will focus on mountainous areas of the pipeline route, where ACP construction threatens water quality in the headwaters of some of the major watershed systems in the eastern United States. Results from the information gathered will be shared with regulatory agencies and the media.

The ACP received a permit for construction from the Federal Energy Regulatory Commission (FERC) on October 13, subject to the project receiving other state and federal agency approvals. FERC approved on January 19 limited tree felling for the ACP.