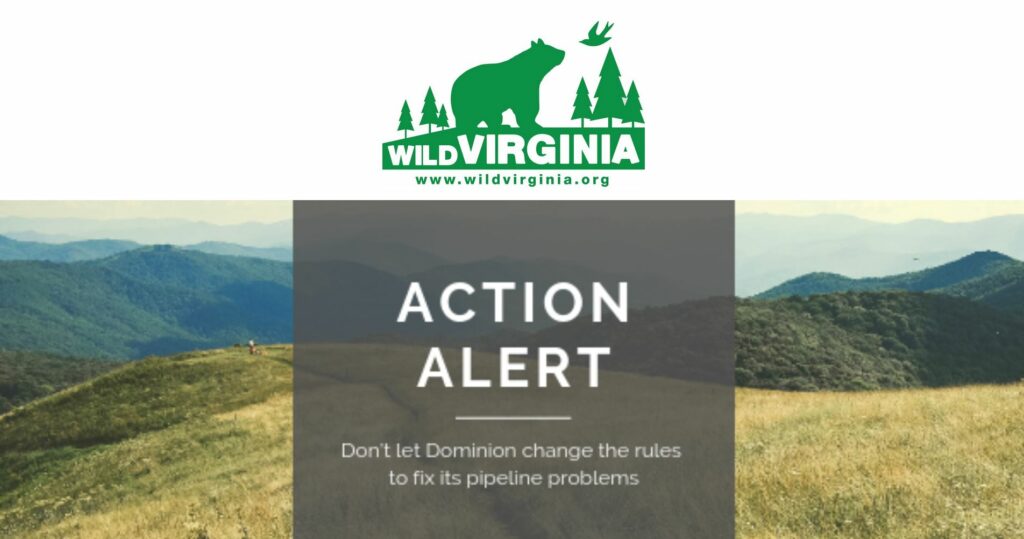 Wild Virginia has issued the following action alert on Dominion’s efforts to build the proposed Atlantic Coast Pipeline across the Appalachian Trail. Friends of Nelson urges our readers to contact their Senators and Representatives.

The proposed route for Dominion’s 600-mile Atlantic Coast Pipeline has been a mess from the beginning. It carves through family farms, steep mountain ridges, and public water supplies, and it is slated to cross the Appalachian Trail on U.S. Forest Service land, a move that federal judges say is not legal. Rather than reconsider their poorly-planned project, Dominion is asking the U.S. Congress to change laws to make way for its unneeded gas pipeline.

Background:
Dominion is in trouble. It’s been five years since the company announced that it would build a high-pressure gas pipeline from West Virginia, across the Allegheny and Blue Ridge Mountains of Virginia, into North Carolina. Today, the proposed Atlantic Coast Pipeline is broadly unpopular, 50 percent over budget (now a shocking $7.5+ billion), and two years behind schedule.

In December 2018, a federal court in Richmond said that Dominion’s plan to cross the Appalachian Trail was not legal, and it overturned the U.S. Forest Service’s approval of the crossing.  Dominion has already tried to sneak a bill through Congress to change the law and allow our precious federal resources to be harmed. The company won’t stop in its efforts to get senators and representatives to change the law and undo the court’s ruling.

We will oppose Dominion’s efforts and call on you to do the same – NOW!

The Appalachian Trail crossing is one of seven permits that federal courts have overturned or put on hold, all because of Dominion’s careless route selection and rushed permitting. And it’s increasingly clear that the pipeline is not needed to meet electricity and gas demand. Worse, electricity customers in Virginia and North Carolina would be on the hook to pay for the costly new pipeline.

Tell your senators and your representative in Congress that you oppose legislation that would change the rules to make way for Dominion’s unneeded and destructive pipeline.

Thank you for taking action to protect the mountain streams, family farms, private property, water supplies, and Appalachian Trail that we all cherish.