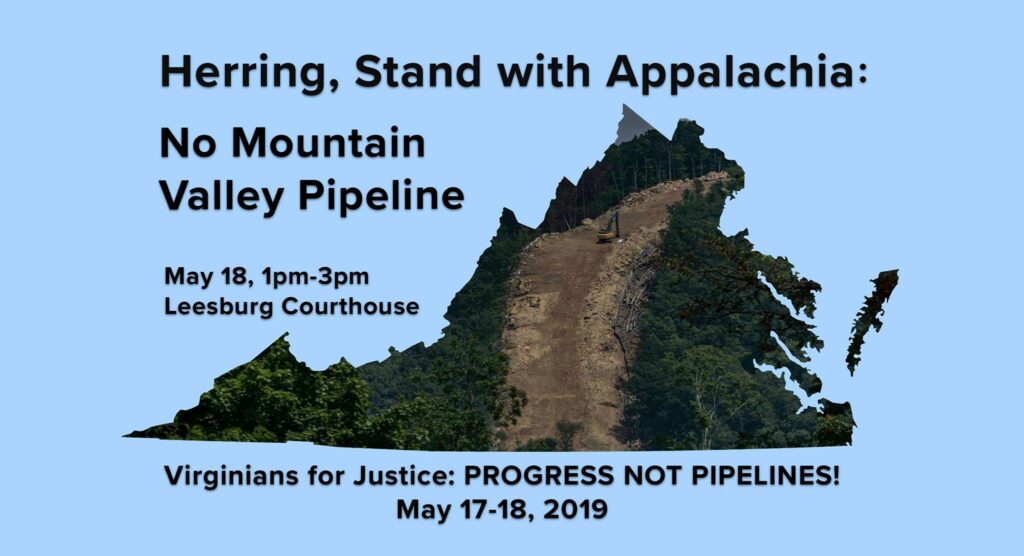 On Saturday May 18, 2019, head up to the rally in Leesburg, 1-3 pm at the Leesburg Courthouse, to call on Attorney General Mark Herring to take every action within his power to halt construction on the Mountain Valley Pipeline. Leesburg is Mark Herring’s home town, and he’s been invited to join the rally. Citizens will be asking that Herring

Delegate Sam Rasoul will be the MC and invited speakers include Karenna Gore of the Center for Earth Ethics at Union Theological Seminary; Reverend Lennox Yearwood of the Hip Hop Caucus; Delegate Chris Hurst; Delegate Elizabeth Guzman; Professor Emily Hammond, George Washington University Law School; affected landowners, and more. Music will be provided by old time fiddler and banjoist Rachel Eddy and the SUN SiNG Collective’s Josh Vana, BJ Brown, and Graham Smith-White. There will be activities for kids, such as face painting, bubble-making, and a make-your-own water or prayer flag station, as well as a giant water spirit puppet courtesy of All Saints Theater Company Light refreshments will be provided with a suggested donation amount.