Richmond, VA — Today, the Virginia State Corporation Commission (SCC) issued a preliminary ruling against a controversial fracked-gas expansion project referred to as the “Header Injustice Project” by affected communities. Under the terms of the decision, the utility may re-apply for a permit but must comply with certain conditions that could prove extremely difficult to meet. If the utility, Virginia Natural Gas (VNG), can show by December 31, 2020, that its main customer — the 1050-megawatt C4GT gas plant — has the financing it needs to build, VNG must also submit information about needed environmental justice analyses and confirm that it will protect VNG’s customers from unnecessary rate increases.

The second condition related to cost protections might prove especially challenging for VNG to meet. To shield VNG’s customers from “holding the bag” for the costs of the project should the gas plant cease operation, the Commission is requiring that the capital cost of the project must be recovered over 20 years instead of the 70 years proposed. VNG’s own rebuttal testimony recognized that “[t]here is a very real risk that if the entire cost of the Project is required to be amortized over 20 years that the Project will be cost prohibitive and not be completed.”

The Commission found that there was a “very real risk” that C4GT might shut down before VNG fully recovered the costs of the Project. In its 2020 session, the Virginia General Assembly voted to join the Regional Greenhouse Gas Initiative (RGGI), which will raise the cost of all carbon-emitting facilities in Virginia, making it more difficult for merchant facilities like C4GT, which sell energy and capacity into the regional power grid, to make a profit.

The Chesapeake Climate Action Network and the Sierra Club, represented by Appalachian Mountain Advocates, intervened in the proceeding and consistently raised concerns about the potential impacts to ratepayers from the proposed 70-year cost-recovery period, among other issues. The Chesapeake Bay Foundation also intervened as did the Southern Environmental Law Center on behalf of Appalachian Voices and Virginia Interfaith Power & Light.

“This was a needed win in these trying times. The Header Injustice Project is so named because it is an absolute travesty in terms of environmental justice. Major components would go through majority-minority communities, and virtual hearings were held about an issue that would impact areas that have limited internet access. As a result, these communities, with little knowledge or say in the project, would have been the worst impacted by its harms: toxic air pollution, noise, threats of explosion. This is the textbook definition of environmental racism.

“But, at the end of the day, it was the arguments around need and cost that moved the needle. This decision recognizes that there is great risk in continuing investments in fossil fuel infrastructure and affirms that ratepayers should not be forced to subsidize these projects. Virginia is on the pathway to 100% clean electricity. Fracked gas should no longer enter the equation.

“We thank the SCC Commissioners who did the right thing today. The tide is turning in Virginia toward clean energy and toward justice. We hope that Governor Northam is paying attention and will use his authority to reject the other terrible fracked-gas projects proposed in the Commonwealth, including Dominion’s Buckingham Compressor Station.”

Virginia Natural Gas is calling the proposal the “Header Improvement Project.” But the organizations fighting it call it the “Header Injustice Project” because it would harm countless communities.

The proposal is for three new gas pipelines, totaling 24 miles, and three new or expanded gas compressor stations from Northern Virginia, through the middle of the state, and to the shore in Hampton Roads. The primary purpose of HIP is to supply gas to the C4GT merchant gas plant proposed for Charles County City. This merchant plant would be located about a mile from the proposed Chickahominy Power Station, a separate gas-fired merchant power plant that would be the largest in the state of Virginia. VNG wants this network of fracked-gas infrastructure to be up and running by the end of 2022.

The project has been tangled in justice concerns from the beginning. The massive gas plant the project is intended to serve is one of two such plants proposed to be built in a community with higher minority populations than the Virginia average. And one key component of the HIP project itself — the Gidley Compressor Station — is also proposed for a predominantly Black community. Yet there has been no environmental justice review carried out.

Furthermore, holding regulatory hearings for the project during the COVID-19 pandemic raised concerns in itself because internet coverage in the area surrounding the Gidley Compressor falls below the state average, leaving residents unable to access information and participate in the process. The first hearing on the HIP proposal was held up by technical issues.

A coalition called the Stop the Abuse of Virginian Energy (SAVE) Coalition has formed to stop this project. Learn more here: www.stophip.org.

The Chesapeake Climate Action Network is the first grassroots organization dedicated exclusively to raising awareness about the impacts and solutions associated with global warming in the Chesapeake Bay region. For 17 years, CCAN has been at the center of the fight for clean energy and wise climate policy in Maryland, Virginia, and Washington, D.C. To learn more, visit www.chesapeakeclimate.org

Atlantic Coast Pipeline, LLC (ACP, LLC) has finally submitted a response to the January 7 decision by the Fourth Circuit Court of Appeals to vacate the Buckingham compressor station. ACP, LLC made recently two supplemental information submissions to the Virginia Department of Environmental Quality (DEQ), each responding to different issues raised by the Fourth Circuit.

An April 24 submission to DEQ responded to the issue of “why electric turbines are not required to be considered in Virginia’s BACT [Best Available Control Technology] analysis of the Compressor Station.” The company’s April 30 submission addressed the Court’s concern about “conflicting evidence in the record, the particular studies it relied on, and the corresponding local character and degree of injury from particulate matter and toxic substances threatened by construction and operation of the Compressor Station.” It is uncertain when the matter will be taken by the Virginia Air Pollution Control Board, as that body has not yet scheduled a meeting to reconsider the project’s air permit.

Friends of Nelson is very pleased to share the Esri Story Map created by Karen Kasmauski of the International League of Conservation Photographers.

This International League of Conservation Photographers is a non-profit organization whose mission is to support environmental and cultural conservation through ethical photography and filmmaking. They had a small grant from BamaWorks to document the impacts that the Atlantic Coast Pipeline would have have on people and places, specifically in Nelson and Buckingham County.

Karen Kasmauski was the ILCP conservation fellow who came to Nelson and Buckingham for an initial reconnaissance/background tour in early September and then returned for more extensive photographing of multiple sites in early October. Friends of Nelson arranged for her to meet with some impacted landowners and see their lands and how the route would affect them. We also took her to visit local breweries and agribusinesses, explore wetlands that would be impacted, tour some of the steepest slope locations on the proposed route as well as some non-route areas that were devastated in Camille, accompany Friends of Nelson’s Doug Wellman for stream testing, observe how we/CSI use drones to monitor the route, and to come aboard and take a flight in the CSI/Pipeline Airforce plane to view the proposed impacts from the air.

In her essay accompanying the photos, Karen speaks of the people she met, saying, “Their stories also made me think about the larger picture of energy and why we continue building infrastructure like the ACP. Natural gas was supposed to be a bridge — a transitional energy source between coal and the increasingly affordable and popular renewables like solar and wind. Renewable success stories abound. Entire towns in Texas, one of the main fossil fuel states, are switching to more cost-effective wind power. While cleaner than coal, production and consumption of natural gas releases large quantities of methane, one of the main contributors to the warming of our planet. Why prolong our dependence on this energy source at the cost of alternatives that will serve us better in the long term? Is it appropriate to link these global concerns to this focused look at one portion of a regional pipeline project? Absolutely. The vast global picture of energy and environment are really comprised of thousands of local issues like those presented by the ACP. The concerns playing out in Nelson and Buckingham counties show us what could be lost should the ACP be allowed to go forward. A close look at the stories here mirror what is repeated in many ways and in many places on similar energy and environmental concerns.”

Click here to view the full set of photos Karen took in Nelson and Buckingham Counties. 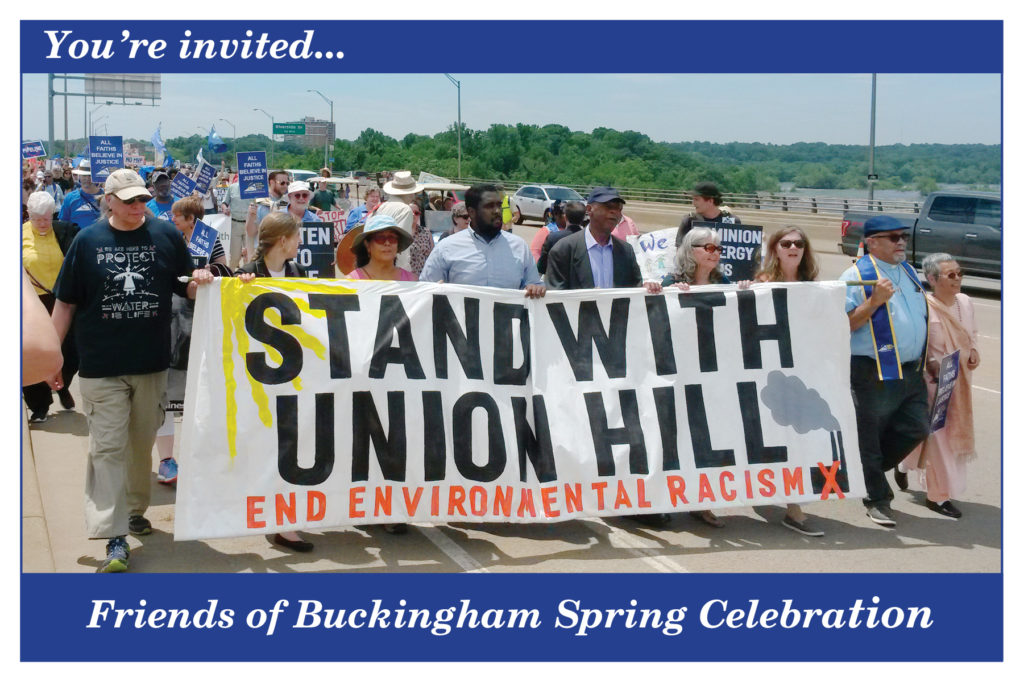 Due to the coronavirus and a desire to keep all of us as safe and healthy as possible, the Friends of Buckingham Spring Celebration is cancelled (for now). We are all so excited to gather with you and celebrate our shared good work, but we’ll have to wait a while yet to do so.

This is an opportunity to show gratitude for all the hard work we’ve put in the last 5 years with the help of allies and partners across the region. We’ll recap where we’ve been and share what is coming up next. Fun games, activities, and music (feel free to bring an instrument if you like). Potluck style. Please bring a dish to share!

We’ll send additional information out closer to the date. Keep an eye on your inboxes for updates in a couple of weeks!

An effort to develop recommendations for incorporation of environmental justice principles into the Virginia Department of Environmental Quality’s (DEQ) programs and actions, announced last September by the agency, will soon begin interviewing environmental justice stakeholders, non-government organizations, local government officials and others in coming weeks. The February 19, 2020 announcement of the forthcoming interviews comes in the wake of the recent decision of the Fourth Circuit Court of Appeals striking down the air permit for the Buckingham County compressor station for the Atlantic Coast Pipeline for reasons that included the Virginia Air Pollution Control Board’s failure to properly consider the environmental justice impacts of the project.

Click here for a copy of the DEQ’s announcement. 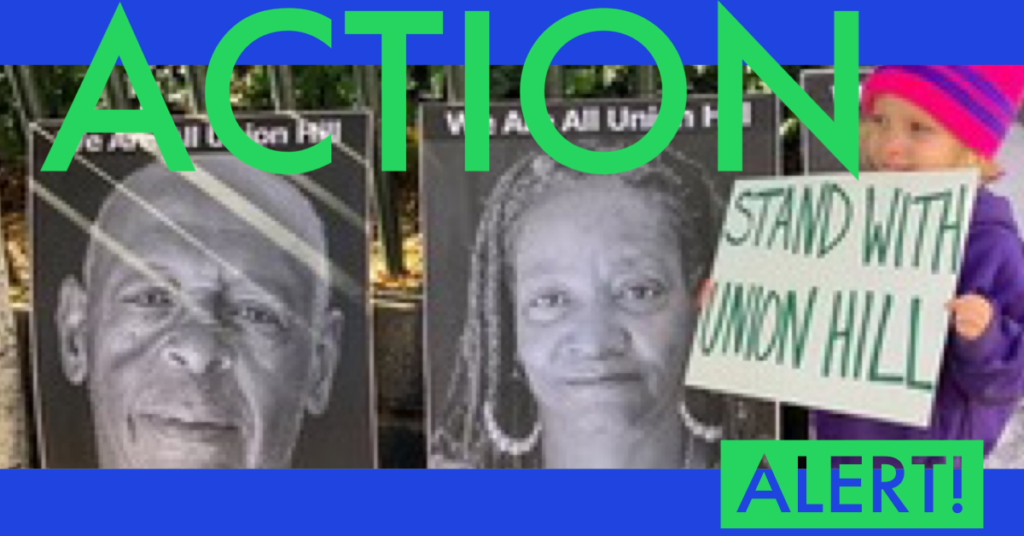 A federal court recently struck down the permit that would allow Dominion to build a huge compressor station in the historic minority community of Union Hill in Buckingham County (https://www.nytimes.com/2020/01/23/opinion/virginia-pipeline.html). Dominion says it will push ahead to build the compressor station, a key part of its Atlantic Coast Pipeline proposal. Please take a moment to to ask Governor Northam to stand with Union Hill and stop this violation of environmental justice. Here’s how to contact the governor: