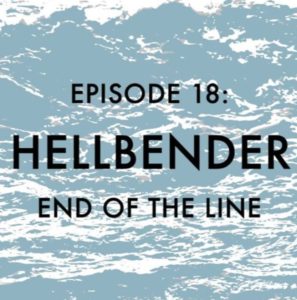 Listen to the new End of the Line podcast, Episode 18, Hellbender. In this episode we hear folks at the “Hellbender Autonomous Zone” talk about the problems around private property and notions of ownership, and how we use collective resistance to fight not just pipelines but the systems that allow for exploitation and extraction that have been allowed to destroy communities in the North America for hundreds of years. Original air date: 6/1/18

Use the links in the sidebar to the right to listen to this and earlier End of the Line podcasts.

WHERE: The Regal Stonefield, 1954 Swanson Dr, Charlottesville
WHEN: Thursday, June 28 at 7:30 p.m.
TICKETS: Tickets are $12 general admission, and proceeds from ticket sales will benefit Friends of Nelson. You must buy your tickets online; no tickets will be sold at the door. Purchase tickets here: https://www.tugg.com/events/little-pink-house-dauw

Based on a true story, a small-town paramedic named Susette Kelo leaves a bad marriage, and starts over in a new town. She buys a rundown cottage with a gorgeous water view. She fixes it up and paints it pink. Then she discovers powerful politicians want to bulldoze her blue-collar neighborhood for the benefit of a multi-billion dollar corporation. With the help of a young lawyer named Scott Bullock, Susette emerges as the reluctant leader of her neighbors in an epic battle that goes all the way to the U.S. Supreme Court, inspires a nation, and helps millions of Americans protect their homes.

In 2005, the nation was shocked by the Supreme Court’s ruling in Kelo vs. New London. In the judgment, the court said that a local government could forcibly seize people’s homes, through eminent domain, in order to transfer the property to a major corporation for development. The response was immediate. Across the country, states passed legislation and amended constitutions to curtail the power of eminent domain.  In 2012, the people of Virginia spoke out overwhelmingly when more than 2.6 million citizens (74.45% of votes cast) approved amending the state constitution to prohibit eminent domain from being invoked if the “primary use is for private gain, private benefit, private enterprise, increasing jobs, increasing tax revenue or economic development.”

The film is being distributed in an unorthodox manner. Local people sign up to bring it to their town and, if enough tickets are sold, a screening proceeds at a selected local theater. We are pleased to announce that Doug Hornig has secured a showing of the film in Charlottesville:

WHERE: The Regal Stonefield, 1954 Swanson Dr, Charlottesville
WHEN: Thursday, June 28 at 7:30 p.m.
TICKETS: Tickets are $12 general admission, and proceeds from ticket sales will benefit Friends of Nelson. You must buy your tickets online; no tickets will be sold at the door. Purchase tickets here: https://www.tugg.com/events/little-pink-house-dauw

Eminent domain is a hot button topic here in central Virginia, as Dominion intends to use it to seize private property for the Atlantic Coast Pipeline. Many of us have been fighting them for several years now, and continue to do so.

We hope to use this event to help educate the public about the importance of fighting eminent domain abuse. Following the film, there will be a panel discussion and Q&A featuring: John Kramer – Institute for Justice, Chuck Lollar – Attorney specializing in eminent domain cases, Richard Averitt – Property owner impacted by Atlantic Coast Pipeline, Joyce Burton – Board member, Friends of Nelson, a nonprofit dedicated to stopping this unnecessary pipeline.

Join us – and bring family, friends, and neighbors! We’ll see you there!

Through the voices of those directly harmed, this video from BXE Beyond Extreme Energy introduces #EminentDomain abuses and the growing movement of people from many regions fighting back. 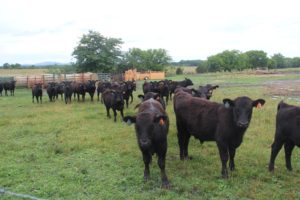 How many of you think it’s only fair for the ACP to make the route adjustment we’ve asked for within our property?

These friendly, curious yearlings will check out everything new in their pasture, including people (they were coming to check me out when I snapped this picture). You can tell from the facilities in the background that we often bring cattle through this area. ACP wants to bisect our entire property and especially, this central field.

We have lots of evidence that pipeline folks do not understand cattle, farming, or the needs of our 100+ year old business. ACP wants to start construction in about a month, but so far, there’s been no discussion of fences to keep these animals or others who come through this field regularly, out of the construction area. I’m not sure the judge who said we’ve got plenty of time to build fence understands that a quick electric fence won’t do the job.

In 2014 we began asking for the pipeline to be moved within OUR property so that it will create fewer problems for our business during construction, reduce the frequency with which we must cross it from now on, and give us a little more safety by moving our buildings to the edge of the incineration zone instead of the middle of it. We are only 4 miles after the compression station so the gas will be at highest pressure. Because we are rural, we only get the lowest safety standards allowed, thinnest pipe, cut off valves 20 miles apart instead of 3 miles apart, last century remote monitoring. We’ve been told that our air is so clean we can afford the new pollution load.

Our multiple requests to move the pipeline within our property are well documented – and ignored by all involved. No written offer for an easement addressed any of our business or safety concerns/ requests. Ultimately, that’s why we never accepted an offer and why they took us to court this week.

Property rights have always been central values of our country and greatly impact the ability of people to achieve their American Dream. While many decry any hint of ANY limitation on what they call Second Amendment Rights, few seem to be willing to fight for property rights that I’d argue are even more central to our ability to succeed in our markets and to our very freedom as citizens.

The ACP is taking a strip of our property for a mile literally through the middle of our business.This will negatively impact us from this point on. It is a government sanctioned way of transferring our asset to a for profit company that is set up as an LLC so it has ultimate protections while granting us no protection (in fact putting extra obligations on us). From now on, the ACP’s interest in our property is legally higher than ours, even though we continue paying property taxes but get no annual income from this infrastructure, only a small one time payment (don’t know what it will be, but when we do, divide it by 70 years and see if it’ll even cover the taxes, much less compensate us for lost value, compensate us for the additional risk and daily hassle of respecting this unsafe infrastructure placed in the middle of our property).

Just curious, how many of you think it’s only fair for the ACP to make the route adjustment we’ve asked for within our property?

No Intruders on Our Land: a new video from Blue Ridge Environmental Defense League. “The land is our family tree and it speaks of legacies, heritage, and memories,” says Valerie of Halifax Co, NC. Duke and Dominion get off. Contact Gov Cooper (NC) and Gov. Ralph Northam (VA) and ask them to rescind approval of the Atlantic Coast Pipeline.

After two very long days of hearings in U.S. District Court in Roanoke (including an unusual Saturday session ending at 7:45 pm), Judge Elizabeth Dillon said she will decide later on Mountain Valley Pipeline’s federal lawsuit against hundreds of landowners in Virginia who have refused to discuss easement agreements that would allow the pipeline to cross their land. After receiving approval in October from the Federal Energy Regulatory Commission, the MVP invoked its power of eminent domain to seek easements on nearly 300 pieces of private property that lie in the pipeline’s path — over the objections of affected landowners in the Roanoke and New River Valleys.