We are delighted to share the video of the Friends of Nelson online celebration of the cancellation of the Atlantic Coast Pipeline. We couldn’t celebrate in person, but on September 5, 2020, two months after Dominion’s announcement, we had a wonderful online party – with speakers, music, and slide shows – and we now offer the video of the party for your enjoyment. Many thanks to our party’s planning team, Mary Eiserman, Jill Averitt, and Joyce Burton, to Irene Leech for her video editing, and to Charlie Hickox for help with the video upload to YouTube.

And – hold the date! – we hope to have an in-person celebration on July 5, 2021, the first anniversary of the ACP cancellation.

Watch this short presentation about all of those whole participated in putting together the Unity Banner as it makes its way to Bent Mountain.

The Blue Ridge Environmental Defense League, its chapters and allies presented a Unity Banner to water protectors and pipeline fighters. The Unity Banner was created to symbolize solidarity between those who successfully fought and stopped the Atlantic Coast Pipeline (ACP) and those who are still fighting the Mountain Valley Pipeline (MVP). Sharon Ponton, BREDL’s Stop the Pipeline Campaign Coordinator shepherded the project and created the banner.

The Unity Banner was hosted in 16 communities; ten in Virginia and six in North Carolina. Hundreds of individuals signed the Unity Banner, representing the diverse members of the coalition created six years ago who have now become a part of the resistance movement against natural gas and other fossil fuel expansion.

Thank you for fighting the Atlantic Coast Pipeline with us.

When, on July 5th, Duke Energy and Dominion Energy abruptly cancelled the Atlantic Coast Pipeline, it didn’t come out of nowhere. For years, SELC and a broad coalition proved again and again that this project was unneeded and unwanted. Finally, those facts forced Dominion and Duke to make the only rational choice and cancel the project.

We’re so grateful to everyone who pitched in to fight this pipeline and create a cleaner future for our region. Thank you!

Click here to read more about SELC attorney and staff perspectives on the victory.

On May 28, 2020, we posted an Allegheny-Blue Ridge Alliance commentary, Six Years and Counting! reflecting on the six years of our fight against Dominion’s Atlantic Coast Pipeline. There was no real demand or need in 2014, and there is even less demand or need in 2020.

Take a look back with two videos, both made in 2015.  The arguments made in the videos are still good – and six years later, the ACP is nowhere near a done deal!

In 2015, Arlo Bloom was a 14-year-old Nelson County resident who would be a 9th grader at Nelson County High School in September 2015. For his 8th grade end of the year school project he created an 18-minute documentary about the Atlantic Coast Pipeline and the issues concerning it.  In the documentary, speaking about the ACP, Connie Brennan, then a member of the Nelson County Board of Supervisors and now Vice President of Friends of Nelson, says, “Young people really need to take this seriously because this is our land, this is our world, and we need all of you to stand up and say, ‘Hey! Hello! You’re leaving all of this to us! What can we do? What should we be doing? What do we want to see for the future?’”

Julie Burns’ brother and sister-in-law, George McCollough and Anna Savoia, made a wonderful video titled “No Pipeline, Say the Friends of Nelson.” You may recognize some of your neighbors in the 29 minute film, including the late John Ed Purvis, a passionate pipeline opponent.  After six years, Julie has just stepped down as Friends of Nelson Board member and Secretary – thanks, Julie! 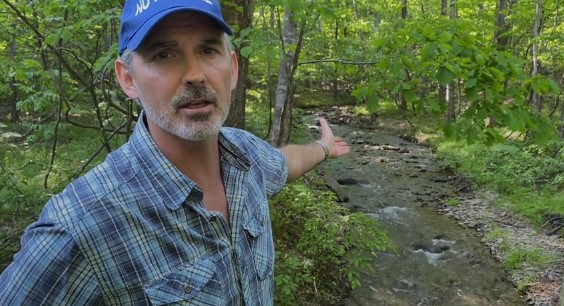 Richard Averitt making the case that the current FERC approach is unfair and destructive and must be changed. Click here for the video, made for Artivism’s SUN SiNG concert series.

Related news stories from the past few days: