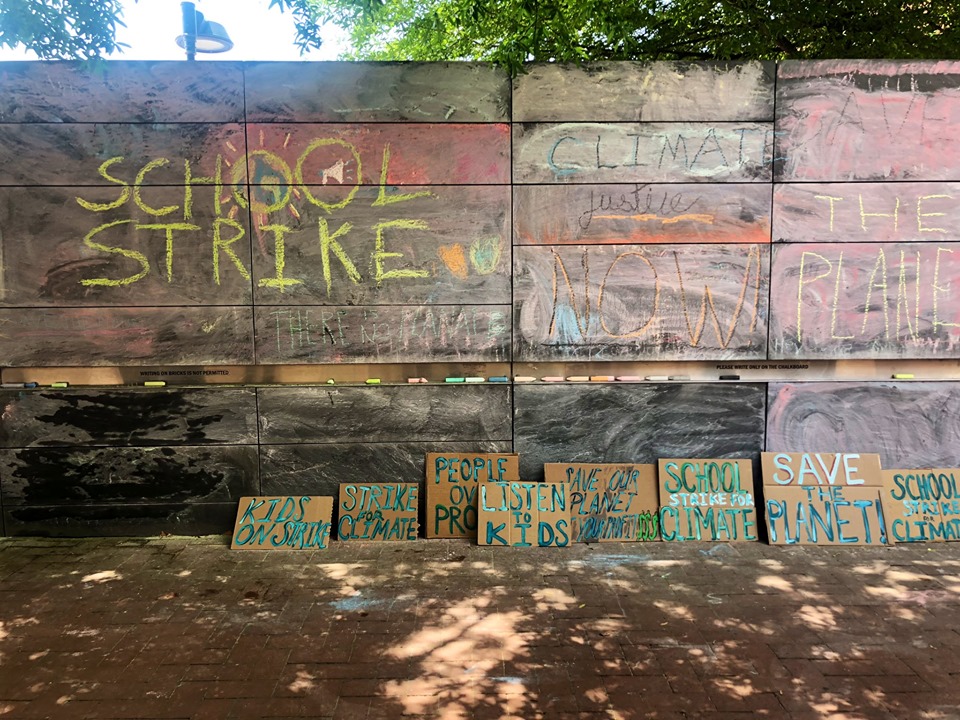 The strike will be from noon to 1pm at the Free Speech Wall downtown on Friday September 20, 2019.

Youth activists will strike to demand transformative action to address the global climate crisis and locally, to stop the harmful Atlantic Coast and Mountain Valley Pipelines and the compressor station in the historic African American community, Union Hill. Rally speakers include Swami Dayananda of the Yogaville Ashram in Buckingham County and a representative from the Virginia Student Environmental Coalition at UVA; additional speakers will be announced soon.

After a short rally, Charlottesville youth will hold a die-in to draw attention to the devastating effect climate change is already having on vulnerable populations and the uncertain future of all youth.

Following the die-in, Charlottesville youth will march on the Downtown Mall. Virginia Student Environmental Coalition at UVA will be rallying on grounds in the morning and marching from UVA to join the youth rally.

Everyone is welcome! Attendees are asked to bring a sign/or tombstone. If possible, adults should wear black.

Building on a historic surge of student protests and strikes for climate action, the September 20 strike comes ahead of the United Nations Summit on Climate Change three days later, when world leaders will convene in New York with the goal of deepening climate ambition. In over 150 countries, people are already pledging to organize events on September 20 and during the Week of Action that follows.

Charlottesville youth, along with partner organizations Virginia Student Environmental Coalition at UVA, Virginia Interfaith Power & Light, the Green Grannies, several other members of the Cville100 climate coalition, and Charlottesville Democratic Socialists of America, are leading the strike to demand stark climate action be taken by local, national, and global politicians.

“As Union Hill faces the compressor station and pipeline, we stand with them in protecting our region from harmful and unnecessary fossil fuel infrastructure, and highlight the burden upon future generations which will be symbolized by a die-in during the rally,” said strike organizer Gudrun Campbell. “Youth around the world have been striking for months and now we call on you, the adults, to join us.”