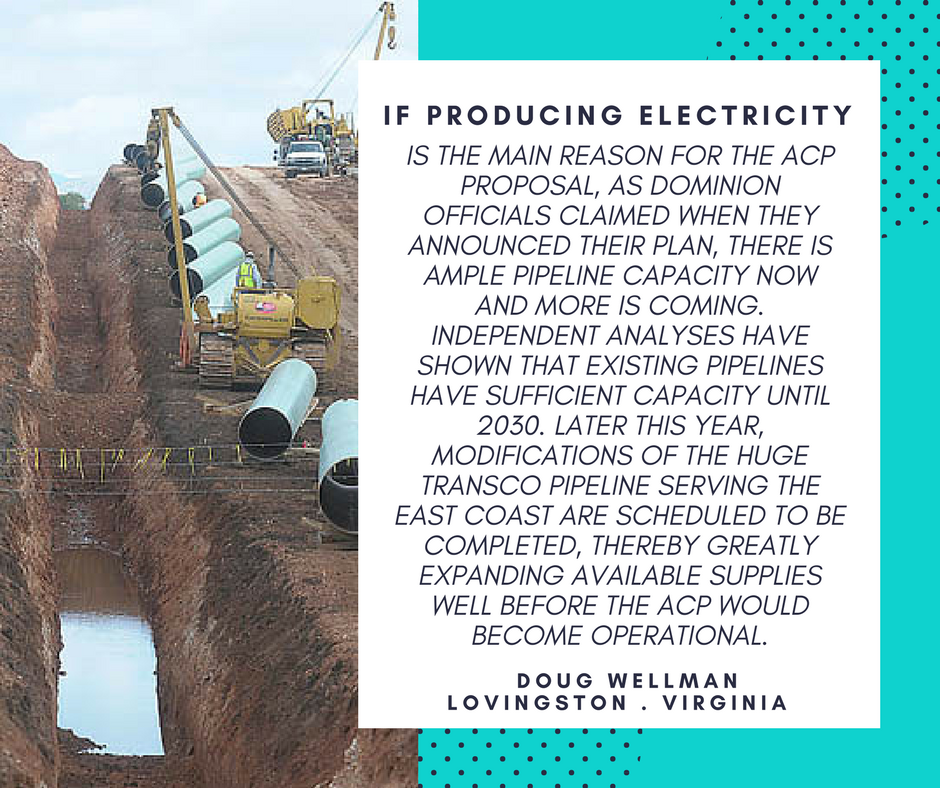 Aaron Ruby, Dominion’s ever-present ACP cheerleader, wants to convince us that our recent cold weather is a justification for the ACP, telling us the cold “demonstrated in dramatic fashion the real and urgent need for the Atlantic Coast Pipeline.” Ruby says that because they used more electricity and gas to run heating systems, customers will see higher utility bills. Yes, we may see higher utility bills for January, but that doesn’t justify the immense long-term cost of the ACP ($2.3 billion more than existing sources, according to the Southern Environmental Law Center) which will be passed to Dominion customers – on every month’s utility bill for years to come.

It is for this reason that a large number of customers might be tempted to find more affordable energy deals elsewhere and could end up switching energy suppliers. Changing energy suppliers has never been easier after all. All it takes is a quick browse of a comparison website such as Home Energy Club, where visitors can find summaries and reviews of some of the most popular energy suppliers out there such as Champion Energy to determine whether a saving could be made.

That being said, Ruby cites “severely limited capacity” of existing pipelines serving Virginia and North Carolina as the cause for a spike in gas costs passed on to customers. Yet in the same article, Chris Stockton, spokesperson for Williams Partners, which operates the Transco System that Dominion relies on, said the pipelines “performed remarkably” during the cold weather. “We were able to meet all of our firm capacity contracts. The system delivered a record amount of gas,” said Stockton, noting that the system delivered about 10 percent of the natural gas consumed in the country on that day, Jan. 5. “It’s an incredible accomplishment. It’s a testament to the system that we have.”

In his letter to the editor, Wellman reminds us that, “Ruby fails to mention that, if the ACP is built, its captive ratepayers will be paying for it for decades. So the question for consumers is whether to pay now – $5 billion to $6 billion direct cost of construction plus Dominion’s 14 percent return on equity – or to pay later if and when there are short-term spikes in gas prices.

“There are good reasons to opt for the ‘pay later’ approach. If producing electricity is the main reason for the ACP proposal, as Dominion officials claimed when they announced their plan, there is ample pipeline capacity now and more is coming. Independent analyses have shown that existing pipelines have sufficient capacity until 2030. Later this year, modifications of the huge Transco pipeline serving the East Coast are scheduled to be completed, thereby greatly expanding available supplies well before the ACP would become operational.

“More broadly, Dominion’s relentless push to build the ACP runs against the global tide – a shift in energy production from fossil fuels to renewables. This shift is necessitated by the threat of devastating climate change and facilitated by the falling cost of solar and wind energy, both of which have reached or are approaching parity with natural gas. Rather than being a bridge to the future, gas is becoming an anchor in the past.

“If the ACP were truly in the public interest, Dominion would be stating its case directly and openly, rather than relying heavily on politics and PR. Building the pipeline truly is not for ‘public use and necessity,’ but just another instance of public pain for private gain.”