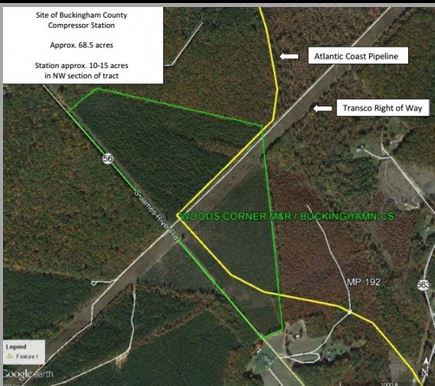 Friends of Buckingham will hold a community meeting to plan outreach to residents in the ACP evacuation zone near the compressor station. The meeting will be Wednesday July 13, 2016, at 7 pm at the Union Hill Baptist Church (1496 Union Hill Rd., Buckingham), right in the heart of the proposed compressor station site. People are bringing baked goods to share.

Friends of Buckingham has received a small grassroots organizing grant from Center for Health, Environment and Justice. The grant has two main objectives: outreach to local landowners and neighborhoods and outreach to national media about Buckingham County’s unique threats from the only proposed Virginia ACP compressor station. Using GIS and county records the group is identifying parcels and owners most highly impacted by the proposed ACP – those who live next to the compressor station and its 2+ mile radius, and all landowners whose land ACP proposes to cross in the county and in the evacuation zone. They plan door-to-door outreach to meet and inform impacted residents, and will use a short set of survey questions to get information that will aid in efforts to identify health vulnerabilities, to get family land history, and past and present uses of the affected land.

Nelson residents are welcome at the meeting! Just as in the pre-historic, colonial, and plantation pasts of Nelson and Buckingham – where Monacans and later settler families lived on both sides of the James – we now face shared burdens of harm from the proposed ACP and our nearness to Virginia’s only compressor station.