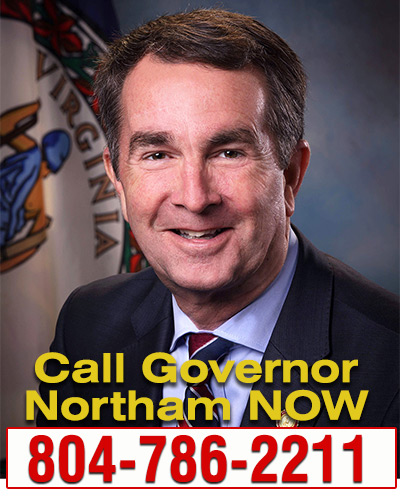 Governor Ralph Northam is digging the hole he’s made himself deeper and deeper.

First, on November 15, 2018, he removed Air Pollution Control Board members Rebecca Rubin and Sam Bleicher after they questioned the permit for the compressor station at the November 8-9 Board meeting, the meeting at which the Board voted to postpone their decision until their December 10 meeting.

Then, on November 16, he announced two new appointments to the Board.

Northam’s office continues to maintain what is clearly unbelievable, saying the timing of the dismissals and new appointments had nothing to do with matters pending for the Air Board, because Rubin’s and Bleicher’s terms expired in June. However, so did those of 235 other appointees, none of whom have been summarily replaced. The hole is a little deeper.

Writing in the Roanoke Times on December 6, Jacob Hileman says, “”If we assume each board and commission member serving beyond his or her term has an equal chance of being removed on any given day by the governor, the odds of the two board members in question being randomly selected are 1 in 27,966.”

Northam made the hole he’d dug a bit deeper when he said in his November 28 appearance on WTOP that he expected the Board to vote in November and did not expect the new appointees to vote on the compressor statement permit. But we all know if that were really true, he could easily have waited to appoint the new members until after December 10 (instead of five days after the November hearing).

Then, on November 26, Northam announced he would not seat the two newly appointed members members until after December 10. Since one of the normally seven-person Board’s members has recused himself, that leaves only four Board members to vote on December 10. Quoted in the Washington Post on November 27, Walton Shepherd of the Natural Resources Defense Council, told the Washington Post that “The awkward lurch to now yank Northam’s new board members does not right the original wrong.”

In that same Washington Post article, “Greg Buppert, a lawyer with the Virginia office of the Southern Environmental Law Center, said Northam’s action could leave the door open for the two removed board members to attend the meeting and vote. State law says that appointees serve until they are replaced, and these replacements haven’t come on board yet, Buppert said. Either way, the outcome does not make the Northam administration look good, he said. ‘I don’t know if this was intentional or just a remarkable stumble on the part of the administration,’ Buppert said. ‘But I think the message that the public heard was that the governor is facilitating a permit for Dominion.'”

But the hole Northam seems still to be digging for himself gets even deeper. On November 30, The Virginia Mercury reported, Governor won’t ‘seat’ new air board members, but still plans to swear them in, precluding participation of former members. According to the article, some argue that “under state law the current members serve until the moment their replacements are sworn in, meaning they could still potentially participate in the meeting barring further action by Northam — an interpretation backed by a 2013 attorney general’s opinion.” Since it would seem members could serve (and vote) until the new members are sworn in, that could have been a graceful out for Northam from his beleaguered position. But no, Dominion certainly doesn’t want the ousted members to vote, so Northam dug his hole deeper by saying he would swear in the new members, but that they would not take their seats on the Board until after the vote.

A Daily Progress editorial on December 5, quotes the Governor’s excuse, emailed to the Richmond Times-Dispatch, for not seating the new members (“Given the compressed timeline the governor’s new appointees face, as well as the level of attention trained on their willingness to serve the commonwealth, they will not be seated until after the upcoming meeting of the air board on Dec. 10.”).  The editorial then says,  “The obvious retort: Mr. Northam’s decision created ‘the compressed timelime.’ Mr. Northam’s decision created the unfavorable ‘level of attention’ — which was to some degree trained on the new members, but more accurately trained on the governor himself. …. Surely it would have been better to have left the board intact for a while longer, preserving a breadth and diversity of opinion in deciding an issue that will affect the residents of Buckingham for a long — a very long — time.”

Robert Zullo, writing in The Virginia Mercury on December 5, asks, “Can Gov. Ralph Northam’s decision to yank two members off the State Air Pollution Control Board as it weighs a permit for the compressor station Dominion Energy plans for Buckingham County be seen as anything other than what it appears to be: a clumsy attempt to tip the scale for the influential utility?” He says Northam has “sunken deeper into this mess of his own making by preventing his handpicked replacements from voting on the contentious air permit next week.” And Zullo concludes, “‘It just was,’ is evidently the best answer the administration can muster for why it has now cast a deep shadow of illegitimacy over a vote on an ultra-contentious project already seen as a dubious power grab by an energy giant mainly focused on shareholder profit.”

The Washington Post refers to all this as an “ugly episode.” Many groups and individuals continue to speak out against a governor who seems to have forgotten that he promised to be a different kind of politician, one who would never lie and always operate aboveboard. The editorial board of the Staunton News Leader describes what is really happening: “There just aren’t enough people to make Northam or others in the state government care about them more than they care about Dominion. Dominion’s influence is pervasive, and it’s people like Northam who reliably do their bidding. We can be disappointed, but shouldn’t be surprised.”

How deep a hole, disappointing but not surprising, will Northam dig?