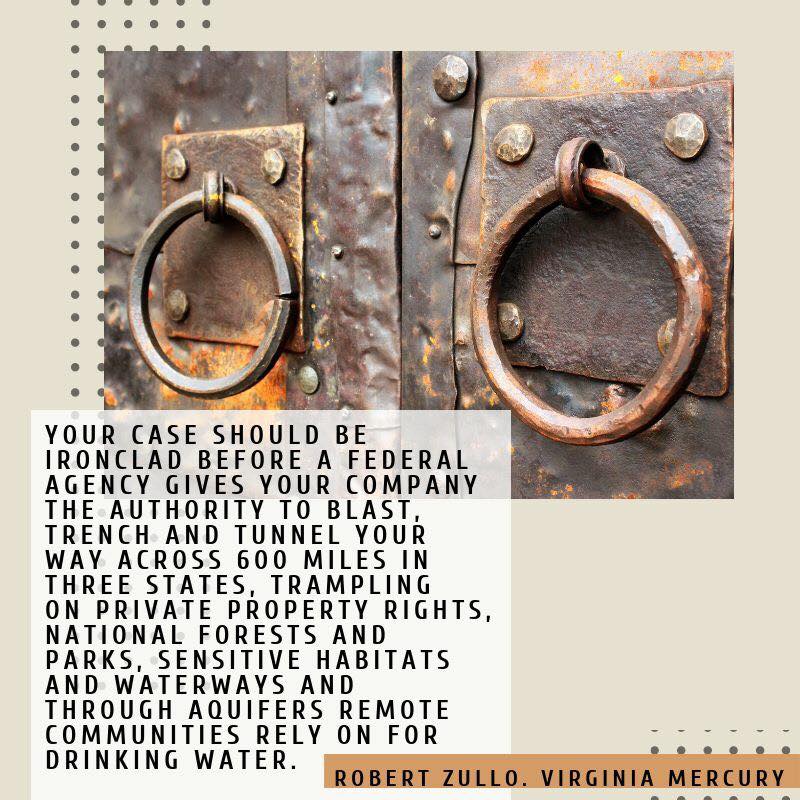 Dominion has just filed petitions for “quick take” against at least 21 Nelson landowners, who will now have to deal with making court filings and appearances during the holidays. Petitions were filed in the US Western District of Virginia Federal Court in Lynchburg.

“Quick take” is a formal process of the exercise of eminent domain in which the government (or in this case, a private for-profit company masquerading as a “public” utility) takes possession BEFORE any court ruling on compensation. In other words, Dominion wants access to begin work on these landowners’ properties BEFORE paying the landowners any money, and BEFORE all permits are in place to allow the ACP to begin construction. Some of the 21 landowners were completely unaware that Dominion had filed against them until the Friends of Nelson Landowner Liaison called them with the information. And some landowners had never even been served with notice of the ORIGINAL condemnation lawsuit, even though it had been filed with the court over a month ago!

Dominion loves filing lawsuits as holiday gifts. In the week before Christmas 2014 they began suing landowners who had refused permission for Dominion to survey their property. Dominion filed lawsuits against 27 Augusta County residents and 20 in Nelson County, requesting the court’s permission to enter the properties and survey potential Atlantic Coast Pipeline routes. Reporting on the filings, the Richmond Times Dispatch quoted Dominion officials, who, by the end of December 2014, expected “to file suit against 56 landowners in Augusta and 122 in Nelson. The court would then start serving notices during the first week of January, and those property owners would have three weeks to answer the complaint. A court date would then be set for hearings in each case.”

It is worth noting that a federal court in North Carolina has issued a stay against ACP’s attempt to acquire rights to a NC property by eminent domain, citing the fact that there are pending legal challenges to the ACP that could result in reexaminiation of the project (see story below). Further, last week in New York a state court ruled that a different pipeline company could not use eminent domain proceedings to cross a landowner’s property because the NY State Water Control had denied the permit for the project.