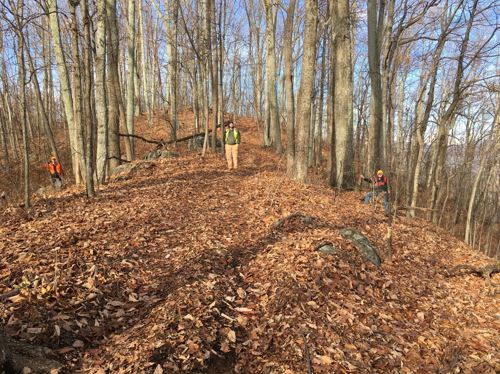 Roberts Mountain is one of several mountain ridges that will be flattened to create a 125′ work area under ACP construction plans.

On March 9, 2018, the Southern Environmental Law Center and Appalachian Mountain Advocates, on behalf of their clients, filed a request asking the Fourth Circuit Court of Appeals in Richmond to halt construction of the Atlantic Coast Pipeline until the court decides whether the Federal Energy Regulatory Commission’s permit is valid.

The challenge to the permit is based on the lack of evidence demonstrating the pipeline is needed in Virginia or North Carolina, as well as data and analysis showing the region already has sufficient pipeline capacity to meet future needs.

This filing comes as the cost of the pipeline has ballooned to $6.5 billion and when there are growing questions about Dominion’s plans for the natural gas as it eyes South Carolina for a possible expansion of the pipeline. The groups contend that the overwhelming evidence shows the true purpose of the ACP is to provide profits for the shareholders of the pipeline’s financial backers, Duke and Dominion, at the expense of those utilities’ ratepayers. The effect of the filings would be a halt to the construction of the ACP until the court considers the coalition’s existing challenges to the FERC certificate that authorizes construction. FERC and ACP have ten days to respond.