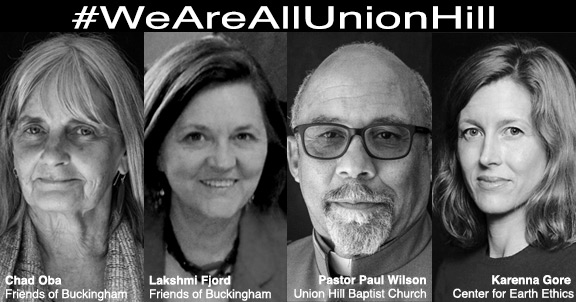 Friends of Buckingham and allies crafted this letter which was sent on December 8, 2018, to the Air Board, the Governor, and other state officials. It is signed not only by impacted Union Hill residents, but by representatives of many local and national organizations.

To: Virginia Air Pollution Control Board
December 8, 2018
An Open Letter Regarding the Threat of Environmental Racism and the Proposed Atlantic Coast Pipeline

There is an undeniable pattern of dangerous, polluting industrial facilities being sited in poor communities of color across our nation. “Environmental racism” is a phrase used to describe this systematic positioning.

Right now, a consortium of companies led by Dominion Energy – the largest corporate donor in state political campaigns – is attempting to place the only Virginia compressor station for its unneeded, natural gas Atlantic Coast Pipeline in the low-income, mostly African-American community of Union Hill, in Buckingham County. Many area residents trace their ancestry to the people enslaved on or near the plantation land sold for this site.

Recently, Governor Ralph Northam’s administration announced that it had dismissed two members of the State Air Pollution Control Board, which is made up of independent citizen experts responsible for evaluating the proposed air pollution permit for this huge facility. This happened six days after a November board meeting where detailed evidence of this site’s environmental injustice had been presented. The two people dismissed had stated during the meeting that environmental justice and climate change impacts must be considered in board permit decisions. In addition, Dominion submitted new proposed permit changes during the meeting, including an offer of $5.1 million to a Dominion-controlled “Union Hill community revitalization plan.” The proposed changes to the permit came 50 days after the public comment period on the permit application closed. The board voted to delay its decision on the permit until December 10.

The governor has been justly criticized for interfering with this permit decision. Not only did he announce the dismissal of the two board members, he further interfered with the board’s independence by signaling that he did not expect the new members to vote at the December meeting. It is unethical to interfere in the citizen board’s decision-making process.

Citizen boards perform an extremely important function in our democracy, providing an additional check on the regulatory process. They serve as an essential last line of defense in ensuring that the public interest is prioritized over private corporate interests.

Therefore, we strongly urge the Air Pollution Control Board to allow the public an opportunity during the December 10 meeting—prior to any vote—to respond to any new information that has been submitted after the close of the public comment period. This includes information expected to be presented by the Department of Environmental Quality about the demographics of Union Hill that would underrepresent the community’s African-American majority. Additionally, because the facts in the record show that the proposed compressor station would have a disproportionate adverse impact on Union Hill, we ask that the board deny the permit.

On August 16, the Governor’s own Advisory Council on Environmental Justice called for a moratorium on the Atlantic Coast Pipeline until completion of serious investigations of credible environmental justice issues. Governor Northam, Attorney General Mark Herring, Secretary of Natural Resources Matt Strickler and Department of Environmental Quality Director David Paylor must honor the environmental justice matters in this air permit decision. It must be addressed now.

The legacy of placing toxic facilities in places where they disproportionately affect poor communities of color is unjust and unacceptable and needs acute examination. It is not right to look the other way while this continues.

Click here to view the 100 other signatories on the letter.