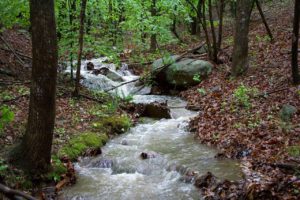 Those commenting to the Department of Environmental Quality (DEQ) in response to the State Water Control Board (SWCB) request for technical information on specific wetland and/or stream crossings are documenting missing, inaccurate and incomplete wetland and stream information in Table B-1 Revised November 30, 2017, “Impact Table of Waters of the U.S. for the Atlantic Coast Pipeline (ACP) within the U.S. Army Corps of Engineers – Norfolk District.” DEQ requires that all comments to the SWCB refer to specific wetland/stream crossing in the Table, a difficult thing to do if the table is inaccurate or incomplete.

The Executive Summary of the comment submitted by the Rockfish Valley Foundation (RVF) states the problem clearly:

We compared the Project Locations on Table B-1 with current ACP Construction Constraint Maps, Rev. 1, dated 3/16/18, pages 62 – 75. The ACP construction plan maps show the ACP pipeline, centerline, work areas, access roads, waterbody, wetland and wetland/waterbody SPCC Plan Restrictions and other information including site identification reference numbers for of each feature. Additionally RVF used its local knowledge of streams and wetlands, flood plain maps, roadways and related historic information. RVF reviewed fourteen Project Locations shown on Table B-1 and added comments on nine additional waterbody/wetland locations missing and omitted from Table B-1. In all RVF reviewed twenty-three waterbody/wetland locations in this 5.4 mile stretch of the ACP. It is likely that the missing locations have not been considered by DEQ or the U.S. Army Corps of Engineers. Additionally, the ACP construction maps show no consideration or planning for the roadway improvement necessary for heavy construction traffic on highways, bridges and side roads in the South Rockfish Valley. Such roadway improvement work will further significantly impact streams and wetlands and degrade water quality. On the basis of missing locations alone, the significant number of waterbody/wetland site omissions indicates that Table B-1 is seriously flawed, incomplete and unreliable as a basis for protecting the rivers, streams, wetlands and water quality standards in Nelson County and the Commonwealth.

Additionally, RVF’s review found thirteen Project Locations in which over one-half acre of wetland/waterbody area per location to be adversely impacted and likely destroyed by the ACP. These thirteen locations exceed the NMP (12) limitations. The cumulative effect of so many waterbody/wetland locations exceeding NMP (12) limits within the limited confines of the South Rockfish Valley present an excessive and unacceptable risk to the rivers, streams, wetlands, flood plains and ground waters of exposure to pollution, sedimentation, alteration of ground water flows, loss of trout streams, aquatic life, bird life, wild life, agricultural, brewery, cidery support, resort and recreational use. Additionally, RVF found numerous errors, omissions and mis-characterizations in Table B-1 which are described in the following paragraphs. Nelson County is dependent upon agri-tourism for it’s livelihood and support of related winery, brewery, cidery industries. Tourist come from all over the world to enjoy recreational and environmental features offered, The South Rockfish River is one source and watershed for the Rockfish River, a designated Virginia Scenic River.

RVF found so many errors, omissions and mischaracterizations in the 5.4 mile stretch of pipeline that RVF concludes the Corps NMP 12 Permit is insufficient to protect wetland and/or stream crossings and preserve the water quality for Nelson County, the general and regional conditions and does not satisfy the Section 401 permit authorizations. In conclusion, RVF recommends that the Water Board require a separate analysis of, and certification for each crossing of a waterbody/wetland on a stream-by-stream basis. Such certification process to include Public Hearings and the provision for, and consideration of, public comments. Such action is essential to protect the waters of the Commonwealth.

To view the full document for RVF Filing, click here.

Horizons Village has just submitted comments pertaining to an additional “missing” crossing in the South Rockfish Valley: a high-consequence wetland which the VA Dept of Conservation and Recreation (DCR) had officially designated as a Conservation Site and requested that ACP route around. Although the ACP route was altered slightly, the pipe itself is still slated to cross the Conservation Site and part of the wetland still lies within the proposed limits of disturbance.

And this wetland is also missing from the DEQ chart.

You can read the comments from Horizon Village here, including pictures and maps. If you want to delve deeper, Horizons Village has also included 18 attachments (221 pages) of substantiating information including copies of their prior contacts with FERC and DEQ, documentation from DCR and the Army Corps re the boundaries of this wetland, and the ACP-prepared easement map which confirms the location of their planned disturbance. Read the attachments (includes an index) here.

An important point raised about the missing and incomplete information in both the Rockfish Valley Foundation and the Horizons Village filings is:  If DEQ/Army Corps of Engineers/ACP’s list of “impacted” waterbodies is incomplete or inaccurate for those within just 5-6 miles in the South Rockfish Valley, waterbodies they have been told about in previous comments, HOW MANY OTHERS IN THE ACP PATH ARE ALSO MISSING?