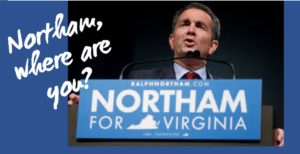 Jonathan Sokolow’s column of September 4, 2018, Pipeline Politics: The Appalling Silence of Virginia Governor Ralph Northam, is worth rereading at this time.

Sokolow’s column concludes, “Ralph Northam seems to have found the time and motivation to speak out on everything from the view from Mount Vernon to his views on oysters. Meanwhile, two of those closest to Northam, his Chief of Staff Clark Mercer and his Secretary of Natural Resources Matt Strickler, have demonstrated not only tone deafness but little inclination to do anything for the people of Union Hill and many other front-line communities. Thousands of people stand to have their lives, water, land and future devasted for generations to come by these proposed pipelines. All for two massive and unnecessary fracked gas pipelines that together represent more than $10 billion in new investment in fossil fuel in Virginia. These pipelines come at exactly the wrong time. when climate change continues apace and is becoming an existential threat to our entire planet. Also to be harmed by these pipelines: Northam’s beloved Chesapeake Bay, including, by the way, the oysters. Northam’s silence is more than just embarrassing. His failure to listen to his own appointees is more than just insulting. One might say his silence is appalling. It needs to stop now.”