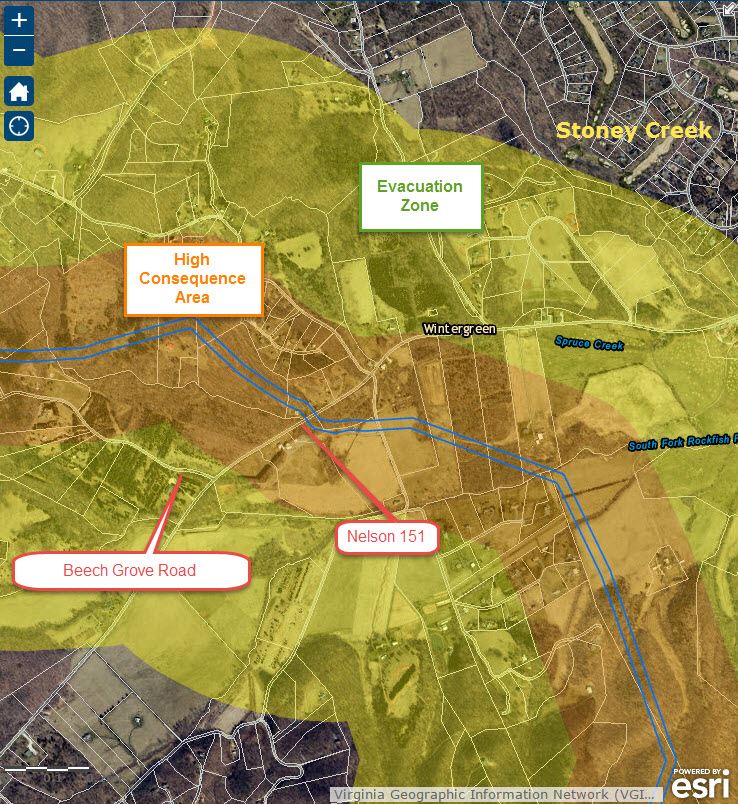 The graphic above illustrates the blast zone for the proposed ACP in Nelson County’s Stoney Creek area. The orange area is the “High Consequence Area,” 1,100 feet on either side of the pipeline, an area within which survival of an explosion would be unlikely. The yellow/green area is the “Evacuation Zone,” 3,583 feet on either side, defined as an area an unprotected human would need to move beyond in order to avoid burn injury in the event of an explosion or fire following a leak.

However, consider the consequences of the late April natural gas 30 inch pipeline explosion in Pennsylvania. There, the explosion of the Spectra line blew a 12 foot deep, 1500 square foot hole and scorched 40 acres. The home of the badly burned man (who as of this date will be in the ICU for several more weeks, and faces a lenghty rehabilitation) was 1500 feet from this much smaller and lower pressure pipeline; the home burned completely. There was significant residential property damage at 1/2 mile from the explosion. In an interview, the Salem Township PA fire chief said there were not many houses close to the explosion and that is what prevented major loss of life. But along the proposed ACP route there are numerous areas where there are many homes – not to mention schools and businesses. Extrapolating from the blast zone of the 30 inch pipeline in Pennsylvania, it is obvious that the projected ACP blast zone as shown in the above graphic is much too narrow.

The Pipeline and Hazardous Materials Safety Administration’s order calls for Spectra to uncover and inspect at least two sections of pipeline on either side of what ruptured. If damage is discovered on those sections, “additional pipe must be exposed until at least 10 feet of undamaged pipe is exposed and examined. The company will be required to excavate two sections of the other three lines in both directions from the blast area and examine them for damage.” Just 10 feet for an explosion felt 6 miles away?!

In a meeting with area residents on May 12, 2016, Spectra had little to offer in the way of answers about what happened and why. Residents are understandably frightened and frustrated. The busy highway near the blast is now closed “indefinitely.”

Dominion says the ACP will be safe. That’s what Spectra told people as well.