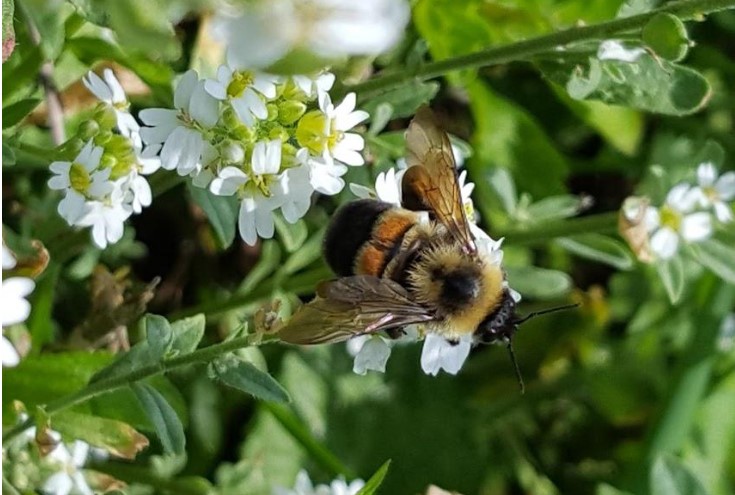 On January 26, 2020, the Charleston Gazette-Mail reported on a proposed recovery plan for the endangered rusty patched bumble bee. The U.S. Fish and Wildlife Service (USFWS) is seeking public comment on a draft plan for recovery of the species listed as endangered under the Endangered Species Act (ESA) in 2017. The draft plan outlines general management actions aas well as criteria that would indicate when the bee may be considered recovered and eligible to be removed from the endangered listing.

According to the Gazette-Mail article, “In 2018, scientists from the Virginia Department of Conservation found 20 of the bees in surveys conducted in Bath and Highland counties, through which the Atlantic Coast Pipeline is routed after crossing into Virginia from Pocahontas County. In a biological opinion allowing the ACP to receive a permit for building the pipeline through West Virginia and western Virginia, the USFWS concluded that populations of the rusty patched bumblebee and three other endangered species in the project area were unlikely to be harmed by pipeline work. The Southern Environmental Law Center sued on behalf of three conservation groups who challenged Fish and Wildlife’s assessment, and in May 2018, the Fourth U.S. Circuit Court of Appeals ruled in their favor, vacating the pipeline’s construction permit. Fish and Wildlife issued a new permit in September 2018, which was again challenged by the same plaintiffs, whose contentions were once again viewed favorably by the court. Implementation of the permit was again postponed, pending the outcome of arguments scheduled for May 2019.”

After those May arguments, the Fourth Circuit issued an opinion in July 2019 saying the USFWS decision “arbitrarily and capriciously reached its no-jeopardy conclusions” for the rusty patched bumblebee, and that it “runs counter to available evidence, relies on data without providing a meaningful basis for that reliance, fails to consider the species’ status as a whole.”

The Gazette-Mail says, “The draft recovery plan for the rusty patched bumblebee includes improving the quality and quantity of habitat near established colonies, improving connectivity between colonies and reintroducing the bumblebees to now-unoccupied sites within the insect’s former range. In order for the population to recover enough to be removed from Endangered Species Act protection by 2059, 159 populations — just over 10 percent of the pre-decline number of populations — would have to be maintained in five conservation zones.”

The draft recovery plan is available at https://www.fws.gov/midwest/endangered/insects/rpbb/.

Public comments will be accepted through Feb. 24. Instructions on how to submit comments can be found at https://www.regulations.gov/ using docket number FWS-R3-ES-2019-3803.