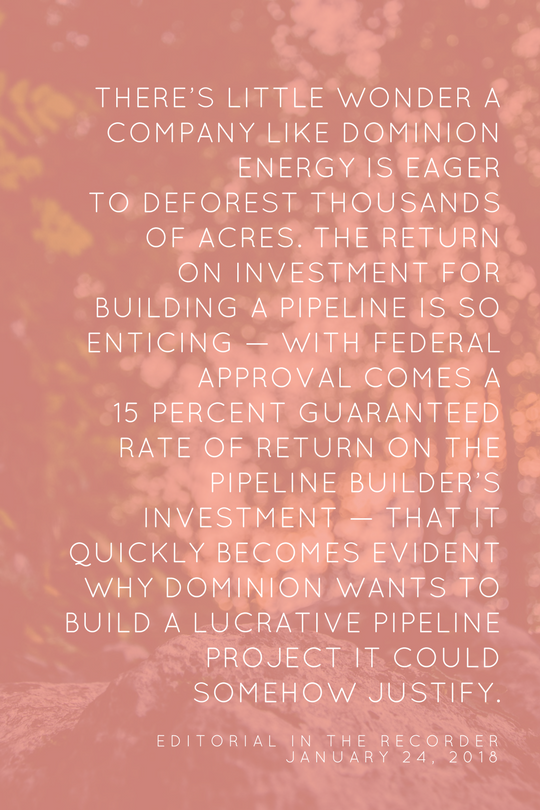 The following editorial is reprinted with permission from The Recorder for January 24, 2018. The list of legislators at the end has been expanded to include those who represent Bath, Highland, Augusta, Nelson, and Buckingham Counties.

Readers may or may not have noticed the news recently about federal regulators giving Dominion Energy the green light to begin slicing huge swaths of mountain forests in preparation for building the proposed Atlantic Coast Pipeline.

We think it stinks.

Cutting an interstate-highway sized void through a forest means only one thing. What was forest is no longer forest. It’s now a pustule, a barren scar, open for all sorts of nasties to wreak havoc on water quality, bordering vegetation and indigenous animal life. It will never be the same. Removal of trees without sufficient reforestation has resulted in habitat damage, biodiversity loss, and aridity. It has adverse impacts on the atmosphere.

In its infinite knowledge, the Federal Energy Regulatory Commission gave the energy giant permission to start felling some of the most pristine trees in the world before all necessary environmental safeguards have been put in place. The go-ahead signals a fait accompli that the proposed pipeline is a done deal, something already accomplished and presumably irreversible. We found it a little more than curious that FERC prescribed a deforestation method whereby trees will be cut to ground level. Root systems and their severed trunks wait in place until pipeline construction is authorized. No doubt the clear-cut method will lay out a scrumptious banquet for ravenous woodland beetles and bugs to begin their work of advancing a manmade process of natural woodland decay and decline.

There’s little wonder a company like Dominion Energy is eager to deforest thousands of acres. The return on investment for building a pipeline is so enticing — with federal approval comes a 15 percent guaranteed rate of return on the pipeline builder’s investment — that it quickly becomes evident why Dominion wants to build a lucrative pipeline project it could somehow justify.

The FERC tree cutting approval arrived shortly after Dominion admitted, for the first time, the real project goal all along has been to take the gas to South Carolina and farther south. The premise flies in the face of the case Dominion made to FERC during the licensing process, that the gas was intended for use in Virginia and North Carolina only. This is pure fraud and grounds for putting an end to the project.

The company’s first 42-inch diameter pipeline, the proposed ACP would feed the Southeast fossil fuel at the expense of permanently scarring our pristine Allegheny Highlands landscapes.

It’s a colossal experiment, a project on a scale matching few, if any of its kind. The work would include not only deforestation but mountaintop removal in West Virginia and Virginia. Dominion prefers the euphemism of “flattening.” Either way, some of our most visually appealing mountains would be forever scalped.

Forest fragmentation results from utility rights of way, and the ACP would be no exception. Utility rights of way span areas as large as 5 million acres in the United States. Some studies have shown that transmission rights of way harbor more plant species than adjoining forest areas, due to alterations in the microclimate in and around the corridor. Forest fragmentation is one of the greatest threats to biodiversity in forests. The problem of habitat destruction that caused the fragmentation in the first place is compounded by the inability of individual forest fragments to support viable populations, especially of large vertebrates. Local extinction of species occurs when there’s a lack of at least one fragment capable of supporting a viable population. The scar alters the conditions of the outer areas of the fragment, greatly reducing the amount of true forest interior habitat.

We think it’s a super sloppy job when Dominion leaves in place sites for construction lay-down yards following a major rerouting two years ago. Now on the table of the Highland County Planning Commission, Dominion land use applications infuriatingly remain in McDowell and Monterey, promising to completely tear up more than 10 miles of Highland’s arterial roadways, including U.S. 250 (where there’s a new bridge), Route 679 (Bullpasture River Road) and U.S. 220 (Jackson River Road).

We take comfort in efforts by citizen groups to police Dominion, which has long been cited for water quality safeguard violations in pipeline construction and coal ash pollution. As noted in a story in this week’s edition, the Allegheny Blue Ridge Alliance has launched a citizen initiative to monitor proposed pipeline construction activities. The alliance of more than 50 organizations in Virginia and West Virginia stated the Pipeline Compliance Surveillance Initiative intends to ensure strict application of environmental laws and regulations for the ACP.

We urge readers to let their feelings be known. The contact information for Bath, Highland, Augusta, Nelson, and Buckingham federal legislators is: