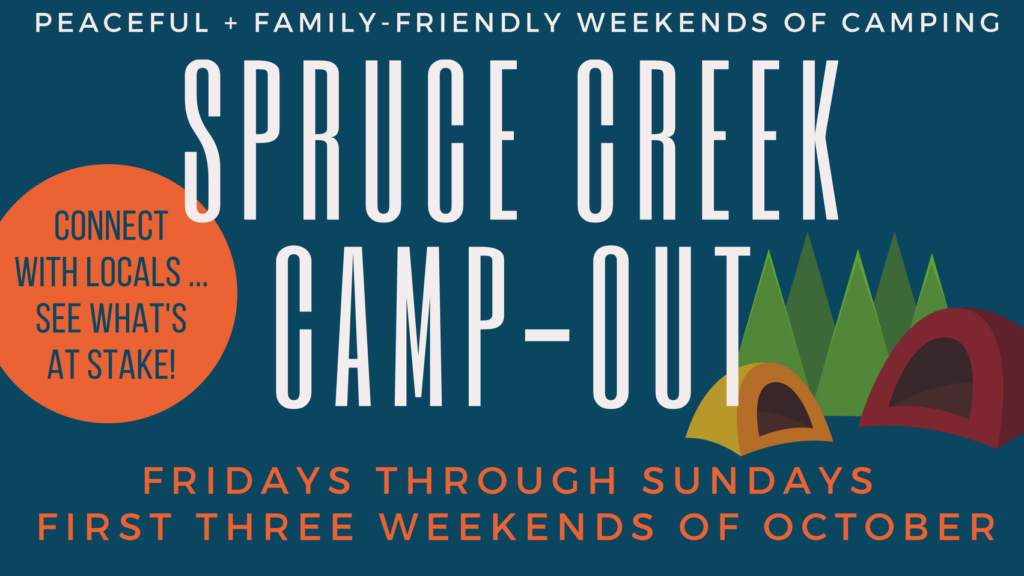 Nellysford, VA: Activists opposed to the Atlantic Coast Pipeline (ACP) are inviting the public to camp on property in its path the first three weekends in October to learn why Nelson County residents are fighting to prevent its construction.

During the first weekend of camp, attendees heard talks and presentations from a number of Nelson County citizen experts, toured local properties that would be affected by the pipeline, and participated in selected topic discussions.

Woody Greenberg, a former reporter, retired Lynchburg College professor, and former member of the Board of Supervisors, and current Secretary of the Nelson Historical Society, gave a brief history of the county and described in detail the devastating effect Hurricane Camille had here due to the intense flooding and landslides that killed 124 people. He emphasized that unstable soils on our steep slopes could fail again during or after construction of a massive 42” pipeline.

Joyce Burton, Friends of Nelson land owner liaison, described how individual properties in the immediate vicinity would be impacted by the pipeline. Effects include contamination of drinking water, wetland and stream bed degradation, ridgetop and old growth tree removal, the economic impact on a newly built country inn, and in one case, elimination of an entire residence due to the proximity of the ACP pipe to its septic and water systems. She also described the inherent pitfalls of ACP’s plan to tunnel under the Appalachian Trail and Blue Ridge Parkway using the Horizontal Drilling (HDD) technique.

Peter Agelasto, President and Founder of the Rockfish Valley Foundation, led a tour of an old mill site near Spruce Creek in the historic area of Wintergreen Village and showed how the proposed pipeline would run thorough the valley’s only archeological site.

Host landowner and anti-pipeline activist, Richard Averitt, described the camp property and his family’s plans to build an eco-resort there. He led a tour of the site and showed the group the deleterious effects the ACP would have on Spruce Creek waterbody. He also showed a slide presentation given recently to the Congress on how this destructive project has affected his family.

Susan McSwain, a Nelson County master naturalist, led the group on a nature walk where she identified native and invasive plants.

Randy Whiting, a resident of Horizons Village adjoining the camp property, led a tour and showed the group where the pipeline would destroy a forest wetland in that community.

Todd Rath, a local cidery owner, related how the project would endanger the water supplies so necessary for his business and, in turn, impact local tourism.

Doug Wellman, vice president of Friends of Nelson, offered the group local alternatives to gas and coal power generation. There are a number of roof top solar projects in the county and nearby, on residences, schools and community centers. There are also solar alternative projects being done by the utilities and electric coops themselves as well as many nearby commercial projects. The energy source profile is changing but many laws and regulations still need to catch up. Off-shore wind, a stable energy source in many European countries is just now beginning to be exploited in Virginia. He also said that energy conservation remains an effective strategy especially for low income residents who would benefit from paying less in utility bills.

Ernie Reed, former president of Friends of Nelson and current member of the Board of Supervisors, discussed how the attendees could influence decision makers and the media in this fight and the importance of continuing to mount legal challenges. He advocated having as many tools as possible to fight pipelines in order to preserve our environment and property rights.

During the weekend of October 12-14, speakers will discuss Nelson County legal challenges, highlight our Compliance Surveillance Initiative (CSI) program, and give a presentation on the proposed Buckingham compressor station; there will be more tours of local properties, and a “Circle of Protection” at 5 p.m. on Saturday.

The Camp, which is free, will be held Fridays through Sundays the next two weekends of October. Pre-registration is required:  REGISTER HERE. “We feel finances should not be a barrier to enjoy the beauty of our area. Donations will be gratefully accepted for Friends of Nelson and Interfaith Alliance for Climate Justice.”