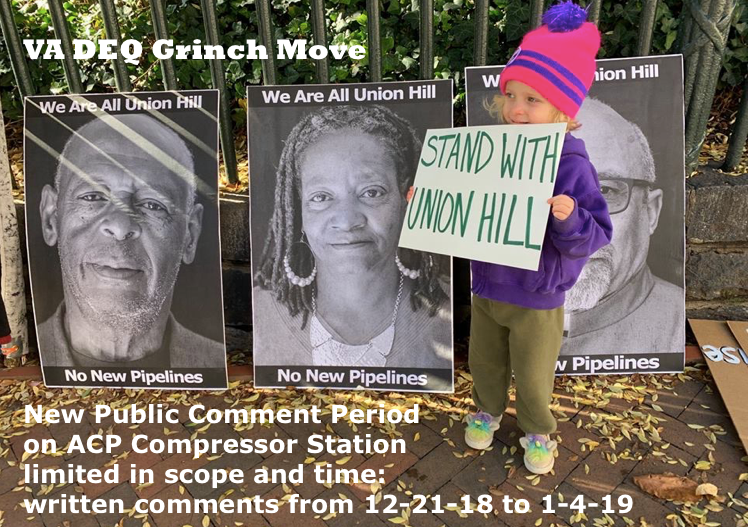 At their meeting on December 19, 2018, the Air Pollution Control Board delayed their vote on the air permit for the proposed ACP compressor station in Union Hill, asking for a public comment period to address the newly submitted or updated information submitted by both supporters and opponents. What is Governor Northam’s and Department of Environmental Quality’s idea of an open and fair comment period? Two weeks over the holidays, two weeks which include four weekend days and four further days when the state government offices will be closed for holidays. You’d think they really don’t want people to comment!

On December 21, the Friday before Christmas, DEQ opened the comment period (of course, no one at DEQ will be back in the office until December 26.)

“DEQ’s decision to schedule this comment period over Christmas and New Year’s is nothing more than an attempt to silence the vast majority of Virginians who will now be unable to participate. Buckingham County communities, including Union Hill, have already been through the ringer as this compressor station threatens their community, homes and health, and this extremely brief comment period adds further tension to an already stressful situation.

“Virginians, just like Gov. Northam and those at DEQ, should be able to spend this time with their families and friends, not fighting against corporate polluters and government processes that have been bent to those corporations’ will. DEQ should extend the length of this comment period further into the new year in order to allow for adequate public engagement”

We must ask who the short window for public involvement serves and the only conclusion is Dominion Energy and DEQ Director David Paylor, both of whom have shown they want this permit shoved through as quickly as possible. …. DEQ has shown that its leaders don’t really want the public to play its proper role in the regulatory process. DEQ can move very quickly when that haste benefits pipeline companies but action is painfully slow when the wider public interest is at stake.  We assume the Air Board members intended the public comment period to be sufficient to gather well-considered and well-supported comments – not to have a comment period designed to make it as difficult as possible for the public. DEQ must extend the period to at least 30 days, a bare minimum for a reasonable process. Fairness demands it.

What should you do? Send your comments, regardless of the attempt to minimize the comment period!  Instructions and links to the documents included in this comment period are on DEQ’s Web site for the Buckingham air permit process, https://www.deq.virginia.gov/Programs/Air/BuckinghamCompressorStationAirPermit.aspx. The documents are also available at the Buckingham Public Library (1140 Main Street, Dillwyn, Virginia 23936), but the library, like the state offices, is closed December 24-25 and December 31-January 1.

The following information is from the DEQ Air Permit page link above:

The documents to be considered per the Board’s instructions relate to questions and concerns on demographics and site suitability for the proposed air compressor station. The Board also clarified that the permit conditions, including the amendments that were discussed and approved at the December 19, 2018, meeting, are not subject to public comment. Further, the Board indicated that public comment is not being sought on the conduct of a health assessment by the Virginia Department of Health.

To submit written comments: Comments are to be submitted to the Virginia Department of Environmental Quality (DEQ):

All comments must be in writing and be received by DEQ before 11:59 p.m. on January 4, 2019. Receipt confirmation will not be provided for comments received during the comment period. Submittals must include the names, mailing addresses and telephone numbers of the commenter, and of all persons represented by the commenter.