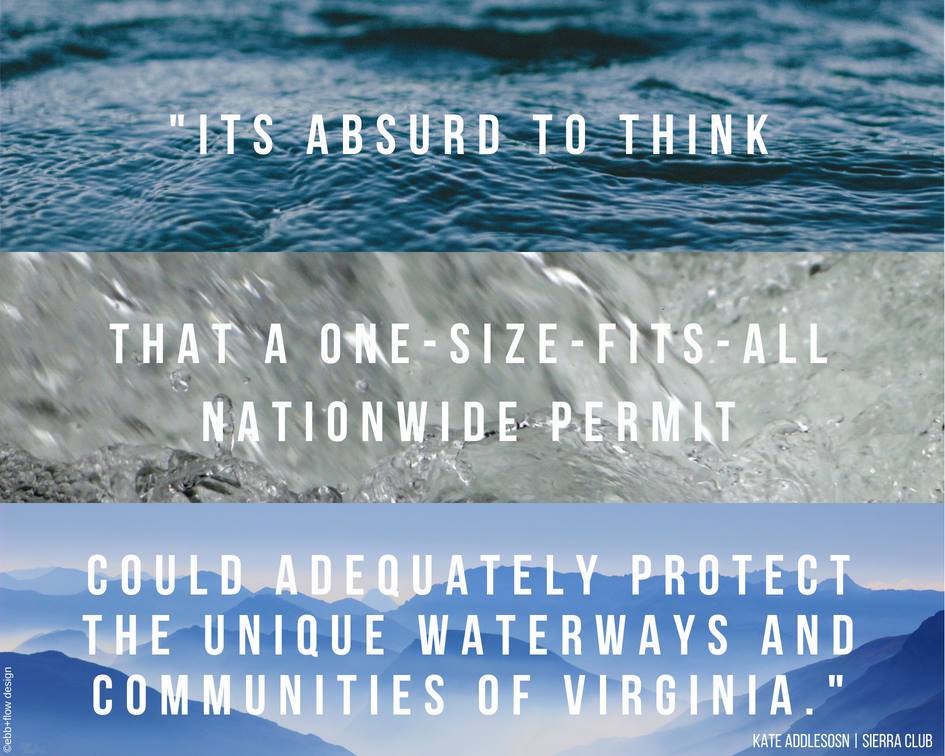 At its meeting on Tuesday August 21, 2018, the Virginia State Water Control Board received a report from the Department of Environmental Quality regarding the recent Public Comment Period on the Adequacy of the US Army Corps of Engineers NWP 12 Review of Stream Crossings for the Atlantic Coast Pipeline and the Mountain Valley Pipeline.

Although earlier reports indicated attendees would not be allowed to speak, the Board did allow 30 minutes of public comment from selected individuals – following the 2 hour presentation from DEQ in which, as noted by Chesapeake Climate Action Network, “The Department of Environmental Quality, headed by the controversial David Paylor, continued to strongly recommend that the board allow pipeline construction to proceed, despite mounting evidence that MVP and ACP have already harmed water quality.”  Many commenters urged the Board to take strong action in light of the problems unveiled by the public comments that were filed.   David Sligh, Conservation Director for Wild Virginia, told Board members, “The fact is that the Corps of Engineers’ permitting decision is not based on water quality standards. They explicitly say over and over that that is not their job, that’s the job of the states. . . For DEQ to tell you that they don’t intend to enforce certain parts of your water quality standards is atrocious and you should not accept that.”

Rather than taking any strong action on its own, the Board chose instead to adopt a motion calling for the DEQ “to aggressively enforce” the Erosion & Sediment and the Stormwater requirements for the ACP and the MVP.

It is not clear yet what effect the Board’s resolution will have.

The full text of the motion adopted by the Water Board follows:

The Board has reviewed the public comment received during the comment period, has heard the staff’s evaluation of the public comments and the sufficiency of the Nationwide Permit 12 to protect stream crossings impacted by the Mountain Valley Pipeline and the Atlantic Coast Pipeline.

The Board has also heard the staff’s report on the status of both projects regarding public complaints, compliance and enforcement and have considered advice of counsel as to the Board’s jurisdiction and authority.

Based on the foregoing considerations, the Board directs DEQ staff:

Staff reports presented to the SWCB are here.

The Richmond Times-Dispatch report of the meeting says, “The water board narrowly defeated, 4-3, a motion to modify or revoke the state’s certification of a nationwide permit to oversee more than 1,000 water crossings by the Mountain Valley and Atlantic Coast pipelines, but agreed unanimously to require more rigorous enforcement of state standards to protect water quality. …. The water board’s action still dismayed a capacity crowd of pipeline opponents who expressed their distrust of the Virginia Department of Environmental Quality throughout a tense, nearly four-hour meeting that they interrupted repeatedly to challenge statements by regulatory staff. …. But some water board members appeared skeptical of the state’s ability to protect water quality from sedimentation, after Melanie Davenport, DEQ’s director of water quality permitting, said the state does not have a way to measure or enforce sediment limits in waterways. ‘That’s really not reasonable assurance we are protecting the water quality,’ said Roberta A. Kellam, a board member from the Eastern Shore. Kellam joined two other members of the seven-member board in supporting an unsuccessful motion to hold a formal hearing on whether to revoke or amend certification of the national permit, which gives regulatory oversight of stream crossings to the Army Corps of Engineers instead of the state.”

Read the statement from Chesapeake Climate Action Network, in which CCAN General Counsel Anne Havemann says, “Instead of requiring an individual review, the Board instead called on DEQ to conduct aggressive compliance efforts. While we are still reviewing the Board’s decision it appears to have no teeth, and could allow sediment to continue to be dumped into the water with impunity. In the midst of public outcry and ongoing harm to water quality, we cannot applaud a decision that merely requires the DEQ do the job it should have been doing all along.  Today is a shameful day for David Paylor’s Department of Environmental Quality, and a sad day for Virginians. But, the fight is not over. We will continue taking these pipelines to court. We are confident that the federal courts will continue to overturn the insufficient permits for these pipelines, and evidence will prove once and for all that these pipelines should never be built.”

Statement from POWHR Coalition.  Points out that “Several members of the Board — Roberta Kellam, Nissa Dean, and Robert Wayland — supported a motion to initiate the formal hearing process to consider amending or revoking the permits for the two pipelines. The motion lost on a 3-4 vote, with Southwest Virginia’s own representative, Lou-Ann Jessee Wallace, voting against the motion.”

Statement from the Chesapeake Bay Foundation.

Southern Environmental Law Center senior attorney Greg Buppert said, “We have seen firsthand that pipeline construction in Virginia cannot be done without causing serious and permanent sedimentation problems to rivers and streams.  The people of the commonwealth deserve better than blanket assurances that everything will be OK when the facts on the ground show that they are not.”

Following are videos from the meeting.

From Appalachians Against Pipelines (1 hour 12 minutes):