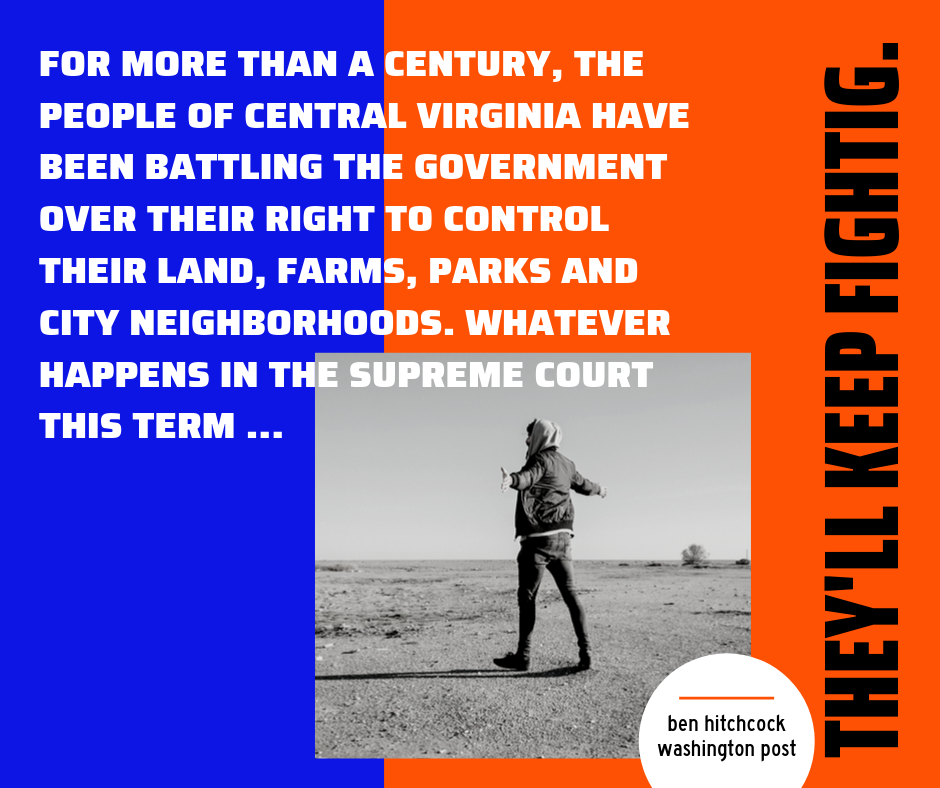 An article in the Washington Post on October 11, 2019, asks, Will Virginians be able to resist the Atlantic Coast Pipeline? It points out that backers of the ACP see the Supreme Court’s consideration of the ACP’s effort to cross the Appalachian Trail as one of getting government regulations out of the way of a private industry (supposedly) operating for the public good.

“But for people in central Virginia, the push for a pipeline is a story of government interference, part of a century of struggle between government authorities and vulnerable populations that have been displaced from the land. …. Urban and rural communities alike have their own collective memories of the encroachment of government-backed industry. Those memories are reflected in the diverse coalition that has come together to fight the pipeline.”

The article describes how “One of the largest land seizures in the history of the state took place in the same forest that Dominion now contests” when Virginia, in the late 1920s and early 1930s, used eminent domain to acquire 190,000 acres in the rural Blue Ridge Mountains, seizing or condemning the homes and farms of about 465 families, removing 2,000 people from land they had tended for generations. Virginia then donated the land to the federal government for Shenandoah National Park.

In 1964, under the guise of “slum-cleansing,” the city of Charlottesville razed Vinegar Hill, home to a thriving community of African American residents and black-owned businesses, Charlottesville’s center of black economic life and culture. The city destroyed 29 businesses and forced 500 residents into public housing – and then for 20 years the land sat unused.

And now in rural Buckingham County, the ACP’s compressor station threatens Union Hill, a historically black community. Residents there have spoken out against the pipeline – as have residents in Nelson County whose planned and established businesses would also be destroyed by the ACP.

The unusual coalition fighting the pipeline reveals “a surprising alignment of interests across traditional social, racial, economic and political boundaries. In Buckingham, Va., Baptists and yogis have joined to fight the pipeline. That unusual coalition is up against powerful forces: the Trump administration, a big energy company and a Supreme Court dominated by conservative justices. But for more than a century, the people of central Virginia have been battling the government over their right to control their land, farms, parks and city neighborhoods. Whatever happens in the Supreme Court this term, they’ll keep fighting.”