Biden picked the North Carolina DEQ Secretary, Michael Regan to be his EPA Administrator.
Although under Regan the NC DEQ did grant water permits to the ACP, it seems their position has evolved somewhat over time. In August 2020 the NC DEQ denied the water permits for the MVP Southgate Extension (citing the project’s speculative nature, given the uncertainties around MVP completion). At the time, Regan actually called it “an unnecessary project that poses unnecessary risks to our environment”

Hooray for getting someone as EPA Administrator who is actually willing to take this kind of public stand against a pipeline project!

The Virginia Department of Environmental Quality (DEQ) is sponsoring a webinar on environmental justice on Wednesday, June 17, from 6-8 pm. The event is being conducted by Skeo Solutions, with which DEQ has contracted to assist it in seeking public input on how the agency can advance environmental justice concepts through its programs. For registration information on participating in the webinar, click here. 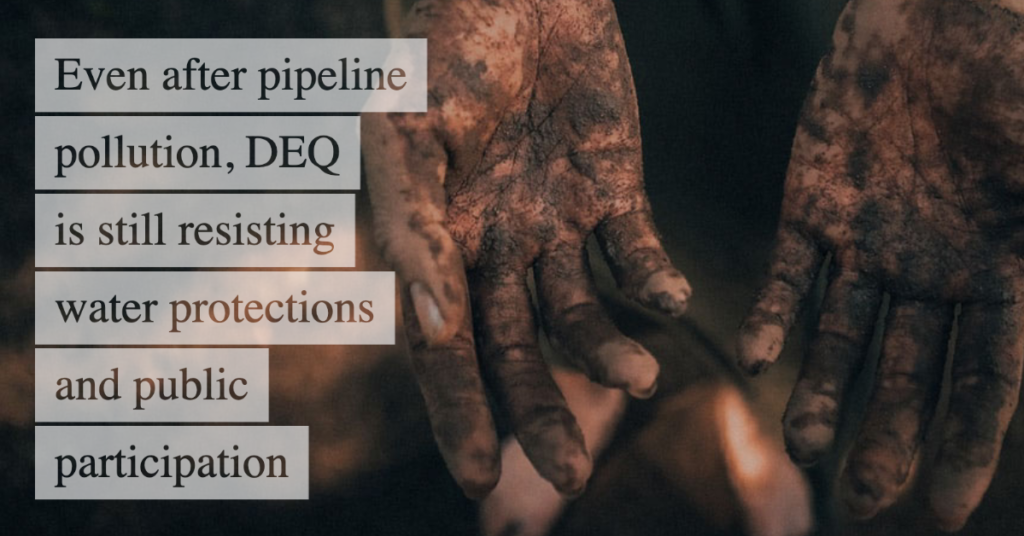 All regulated entities are expected to make every effort to comply with environmental compliance obligations, adhere to permit limits, and maintain the safe and environmentally protective operation of their facilities. We recognize this is an unprecedented public health crisis. DEQ must balance environmental protection with protecting the public’s health. As we all continue to navigate through this crisis, DEQ staff will consider non-compliance issues resulting from COVID-19 on a case-by-case basis, but by no means does this crisis equal a free pass for the regulated community.

However, should growing health concerns and public safety recommendations resulting from COVID19 and Governor Ralph Northam’s Executive Order 51 declaring a state of emergency in Virginia affect normal operations, DEQ will review non-compliance issues on a case-by-case basis and exercise enforcement discretion as appropriate.

The WV DEP issued a statement on March 27 saying:

It is important to note that the WVDEP expects facilities to continue to be operated in a manner that fully protects human health and the environment. This includes, but is not limited to, continued operation and monitoring pollution control devices, record-keeping, maintenance, testing, and reporting requirements. If compliance is not reasonably practicable due to issues related to COVID-19 pandemic, facilities with environmental compliance obligations should contact the WVDEP and follow the requirements outlined in the EPA memorandum listed here: https://www.epa.gov/enforcement/enforcement-policy-guidance-publications.

The COVID-19 pandemic is having a decisive impact on the activities of regulatory agencies and courts who have jurisdiction over pipeline issues. Within the last few days, the following has occurred:

The Commonwealth of Virginia is proposing to enter into a judicial consent decree with Mountain Valley Pipeline LLC to settle certain alleged violations of the Commonwealth’s environmental laws and regulations related to construction activities in Craig, Franklin, Giles, Montgomery, Pittsylvania and Roanoke Counties, Virginia (Case No. CL18006874-00 in Henrico County Circuit Court).  The consent decree will require the payment of $2.15 million penalty, put MVP under stricter court-ordered compliance, and enhance Virginia’s ability to detect any future violation, allowing for faster, more effective accountability and environmental restoration and protection.

Written comments on the proposed consent decree will be accepted from October 28, 2019, through November 27, 2019, and should be submitted to mountainvalleypipeline@deq.virginia.gov or by postal mail to Room 2253-A, Department of Environmental Quality, P.O. Box 1105, Richmond, Virginia 23218, or hand-delivery by close of business to Department of Environmental Quality, 1111 East Main Street, Suite 1400, Richmond, Virginia 23219.