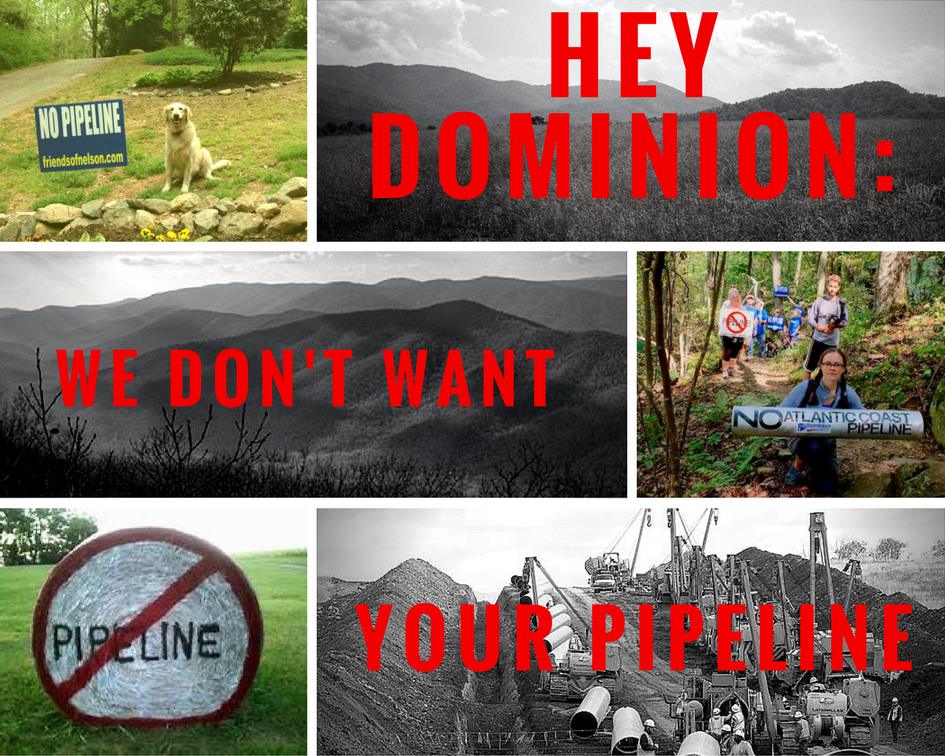 Reactions to FERC’s release of the Environmental Impact Statement (EIS) for the ACP were swift:

Oil Change International issued a press release titled FERC’s Atlantic Coast Pipeline Review Shrugs at Climate Disaster, which begins by saying, “The Federal Energy Regulatory Commission (FERC) today released its Final Environmental Impact Statement for the Atlantic Coast Pipeline, a 600-mile project driven by Dominion Energy and Duke Energy that would carry fracked gas from West Virginia through Virginia and North Carolina. In the review, FERC continues its systemic failure to seriously assess whether the pipeline is needed, while appearing to shrug off the damage it would inflict on people’s land, water, health, and the climate. Oil Change International Research Analyst Kelly Trout had the following response: ‘With this sham review, FERC is teeing up Dominion and Duke to reap big profits on the backs of communities, their own customers, and the climate. FERC’s climate assessment is laughable. The agency grossly undercounts climate pollution by omitting fracking emissions, downplaying methane leakage, and wrongly assuming gas will replace coal when it increasingly displaces clean energy. It’s common sense that we can’t solve the climate crisis by digging a bigger hole of pollution. But that’s exactly what FERC is systematically helping the gas industry do.'”

7-21-17 News Leader. Dominion sees ‘clear path to approval’ for pipeline after FERC releases report. “In its environmental assessment, FERC concluded that the pipeline’s construction and operation ‘would result in temporary and permanent impacts on the environment’ and ‘would result in some adverse effects.’ However, the commission also wrote that if the pipeline developers follow through with ‘impact avoidance, minimization, and mitigation measures’ and heed FERC recommendations to ‘further avoid, minimize, and mitigate these impacts, most project effects would be reduced to less-than-significant levels.’ Dominion Energy sees this conclusion as favorable — it ‘provides a a clear path for final approval of the Atlantic Coast Pipeline this fall,’ said Leslie Hartz, Dominion’s vice president of engineering and construction, in a press release…. Lew Freeman, executive director of the Allegheny-Blue Ridge Alliance, an organization that’s vocally opposed the pipeline, said FERC’s environmental review ‘reveals significant gaps in information and woefully inadequate analysis’ in a press release.”

7-21-17 Washington Post. Environmental report on pipeline favorable for developers. “The Federal Energy Regulatory Commission, which oversees interstate natural gas pipelines, released its final environmental impact statement Friday for the proposed 600-mile (965-kilometer) pipeline, which has broad support from political and business leaders but is staunchly opposed by environmentalists and many affected landowners. The assessment is a major milestone in the approval process for the project that will cross hundreds of bodies of water, mountainous terrain, national forest, and the Appalachian Trail. Its findings were largely favorable for developers. The impact statement did find that construction in steep terrain could increase the potential for landslides and that the project was likely to adversely affect seven species protected under the Endangered Species Act. It found that the greatest impact on vegetation would be on forested areas, with more than 3,400 acres having long-term or permanent effects.”

Additional media reports on the release of the EIS:

On Friday [July 21, 2017], the Federal Energy Regulatory Commission (FERC) released its Final Environmental Impact Statement (FEIS) for the Atlantic Coast Pipeline (ACP). Also on Friday, the United States Forest Service released its draft Record of Decision that could allow permitting of the ACP through the George Washington and Monongahela National Forests. Friends of Nelson concludes that these documents are “irredeemably flawed.”

The reports rely solely on the project developer’s claims of need for the 600-mile, $5.2 billion pipeline, which would yield substantial profit for Dominion Energy and the other private companies behind the project, while the public would be saddled with the long-term and permanent financial, environmental and health costs.

Ernie Reed, President of Friends of Nelson noted that “The FEIS paints a terrifying picture of a bleak future: 4,892 acres of interior forest habitat would be eliminated, creating 30,025 acres of new forest edge habitat and destroying 214 acres of National Forests…1,669 waterbody crossings, threatening native trout streams and severing Potomac, James and Roanoke River watersheds…permanent scars on the Appalachian Trail…100 miles of construction on steep slopes including those in Nelson County…and the truth is actually worse, as the combined impacts of the ACP and MVP (Mountain Valley Pipeline) are never considered…and all this to give Dominion and Duke Energy enough gas to burn our way into hell.”

“It is beyond shocking that FERC has thus far not completed essential biological studies or consultation with the US Department of Fish and Wildlife Service, and how much is being left to state agencies to address later,” said Marilyn Shifflett of Friends of Nelson. “This document is premature and incomplete and its conclusions defy science and logic.”

In Nelson County, construction is predicted to take longer than a year, including creation of the landing and drill pad to be located adjacent to the entrance to Wintergreen and a still-unanalyzed 2.5 million gallon water impoundment on the Rockfish River. The bulldozing, trenching and blasting in areas of cultural and historical value in Wingina, Dutch Creek, Wheeler’s Cove and the Rockfish Valley have all been deemed “insignificant” by FERC.

“The destructive effects on our economy, our roads, our water and our community are unfathomable,” Reed said.

Confirming what Friends of Nelson has long maintained—and what independent soil scientists have affirmed—the FEIS tellingly asserts that “considering the historic and recent landslide incidence in the immediate project area…we conclude that constructing the pipelines in steep terrain or high landslide incidence areas could increase the potential for landslides to occur.” Yet development of other slope instability/landslide risk reduction measures have not been completed and have not been adopted.

“How can landowners determine what kind of impacts the construction on steep slopes will have if the details of how ACP is going to manage them are still ‘under development’?” asked Joyce Burton of Friends of Nelson. “And furthermore, why would Dominion be willing to put Virginia citizens and water resources at risk by building it?”

“The most significant thing about this release is that it brings us one step closer to stopping the Atlantic Coast Pipeline,” Burton continued. “We have spent the last 3 years building our legal case, documenting the potential impacts to residents with expert economic and steep-slope studies and water quality analysis that clearly define the danger this presents to Nelson County. Now this is all coming to a head.”

“It is inconceivable that anyone could conclude, as FERC and the USFS do, that the massive impacts of the ACP are ‘less than significant’,” Reed concluded. “This will not be allowed to happen.”

In Joint Comments filed with FERC on July 14, 2017, seven groups urged FERC to include in the final Environmental Impact Statement (EIS) for the ACP a recommendation that the ACP alter its proposal to avoid Virginia Outdoors Foundation (VOF) open-space easements, the same approach to protecting VOF easements that FERC recently took with the Mountain Valley Pipeline (MVP).

The Comments state, “One issue of common and significant concern is the impact the proposed ACP route would have on ten open-space easements held by VOF and, by extension, the Commonwealth of Virginia’s open space land protection program. The proposed route that Atlantic Coast Pipeline, LLC (Atlantic) is pursuing for the ACP would cross ten VOF open-space easements, permanently impacting 54.6 acres of protected property and damaging another 73.8 acres of these properties with construction access roads and other related disturbances. These are just the direct impacts to these parcels; there would also be substantial and irreversible indirect impacts. As VOF has made clear, such a major intrusion on VOF open-space easements would not only impair the conservation values of each of the ten affected properties, it could jeopardize the Commonwealth’s investments in conservation and result in a loss of public confidence in the effectiveness of openspace easements.”

The Comment also points out that it is not VOF but the ACP “that has proposed the Hayfields Farm property as potential mitigation for impacts to VOF’s open-space easements, and it has done so as part of its effort to persuade VOF to grant ‘conversions’ of the open-space easements pursuant to a provision of the Virginia Code. Of note, VOF has not acted on Atlantic’s requests.” 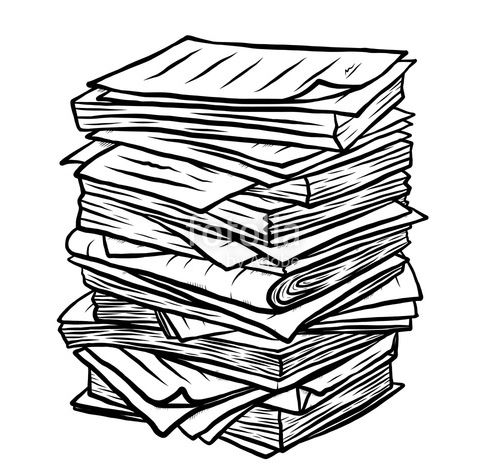 A June 5, 2017, Roanoke Times article discusses the immense number of supplemental filings submitted to FERC by the Mountain Valley Pipeline after the December 22, 2016, closing date for public comment (10s of 1000s of pages) and the calls by watchdogs for a properly indexed (so “the average person can navigate and understand”) supplemental DEIS before the release of the MVP’s final environmental impact statement, currently scheduled for June 23, 2017. Speaking about the Atlantic Coast Pipeline, Dominion’s Aaron Ruby said Dominion has “submitted about 10,000 pages since the close of the [ACP] comment period” on April 6, 2017.

Carolyn Elefant, whose law firm often represents pipeline opponents, said substantial filings with FERC after the release of a draft environmental impact statement are not uncommon and are sometimes warranted, but that “her experience suggests the bulk of supplemental filings relate to requests by FERC for more information about known impacts. ‘Often, companies will wait until after the draft EIS deadline to file these materials to prevent landowners from commenting — and that is unfair,’ she said. She said that even though pipeline companies sometimes blame federal and state agencies and the public for project delays, the companies themselves often delay submission of information.”

Meanwhile, many commenters continue to call for a “programmatic environmental impact statement, which would provide, they say, a more comprehensive review of the environmental and other cumulative impacts of several interstate pipelines designed to transport natural gas extracted from the Marcellus and Utica shale formations in the Appalachian Basin.” Such a programmatic EIS would include both the Mountain Valley and Atlantic Coast Pipelines.

FERC has announced that the issue date for the final Environmental Impact Statement (EIS) for the proposed ACP will be July 21, 2017, a three-week slippage from the originally scheduled June 30, 2017. The mandated 90-day Federal Authorization Decision Deadline will now be October 19, 2017. Read the FERC issuance about the date change here.