Friends of Nelson is very pleased to share the Esri Story Map created by Karen Kasmauski of the International League of Conservation Photographers.

This International League of Conservation Photographers is a non-profit organization whose mission is to support environmental and cultural conservation through ethical photography and filmmaking. They had a small grant from BamaWorks to document the impacts that the Atlantic Coast Pipeline would have have on people and places, specifically in Nelson and Buckingham County.

Karen Kasmauski was the ILCP conservation fellow who came to Nelson and Buckingham for an initial reconnaissance/background tour in early September and then returned for more extensive photographing of multiple sites in early October. Friends of Nelson arranged for her to meet with some impacted landowners and see their lands and how the route would affect them. We also took her to visit local breweries and agribusinesses, explore wetlands that would be impacted, tour some of the steepest slope locations on the proposed route as well as some non-route areas that were devastated in Camille, accompany Friends of Nelson’s Doug Wellman for stream testing, observe how we/CSI use drones to monitor the route, and to come aboard and take a flight in the CSI/Pipeline Airforce plane to view the proposed impacts from the air.

In her essay accompanying the photos, Karen speaks of the people she met, saying, “Their stories also made me think about the larger picture of energy and why we continue building infrastructure like the ACP. Natural gas was supposed to be a bridge — a transitional energy source between coal and the increasingly affordable and popular renewables like solar and wind. Renewable success stories abound. Entire towns in Texas, one of the main fossil fuel states, are switching to more cost-effective wind power. While cleaner than coal, production and consumption of natural gas releases large quantities of methane, one of the main contributors to the warming of our planet. Why prolong our dependence on this energy source at the cost of alternatives that will serve us better in the long term? Is it appropriate to link these global concerns to this focused look at one portion of a regional pipeline project? Absolutely. The vast global picture of energy and environment are really comprised of thousands of local issues like those presented by the ACP. The concerns playing out in Nelson and Buckingham counties show us what could be lost should the ACP be allowed to go forward. A close look at the stories here mirror what is repeated in many ways and in many places on similar energy and environmental concerns.”

Click here to view the full set of photos Karen took in Nelson and Buckingham Counties. 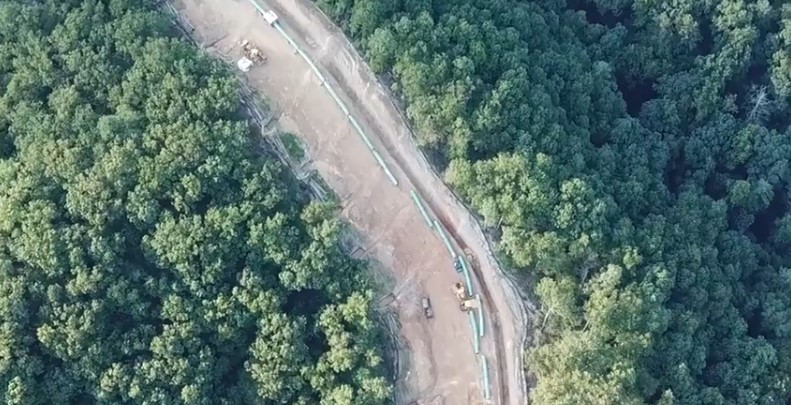 Burning the Bridge: the Story of the Mountain Valley Pipeline is an excellent 6-minute video about pipeline projects produced by two Blacksburg high school students. Watch it, vote for it (through February 29), and share it. 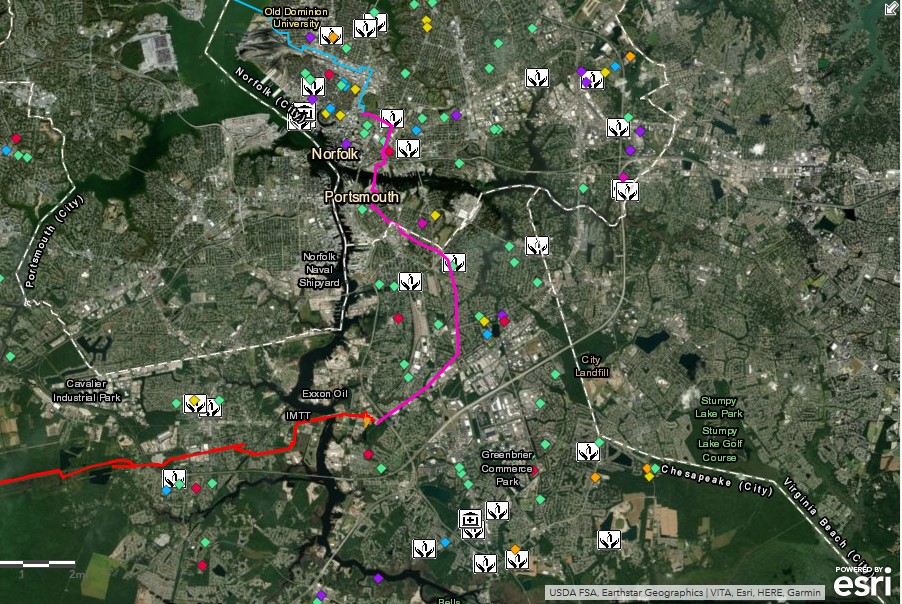 A new map, prepared by Friends of Nelson Board member Charlie Hickox, shows the routes of existing and proposed natural gas pipelines in our region.  You can look forward to seeing a large version of this map displayed when we table at events and meetings. 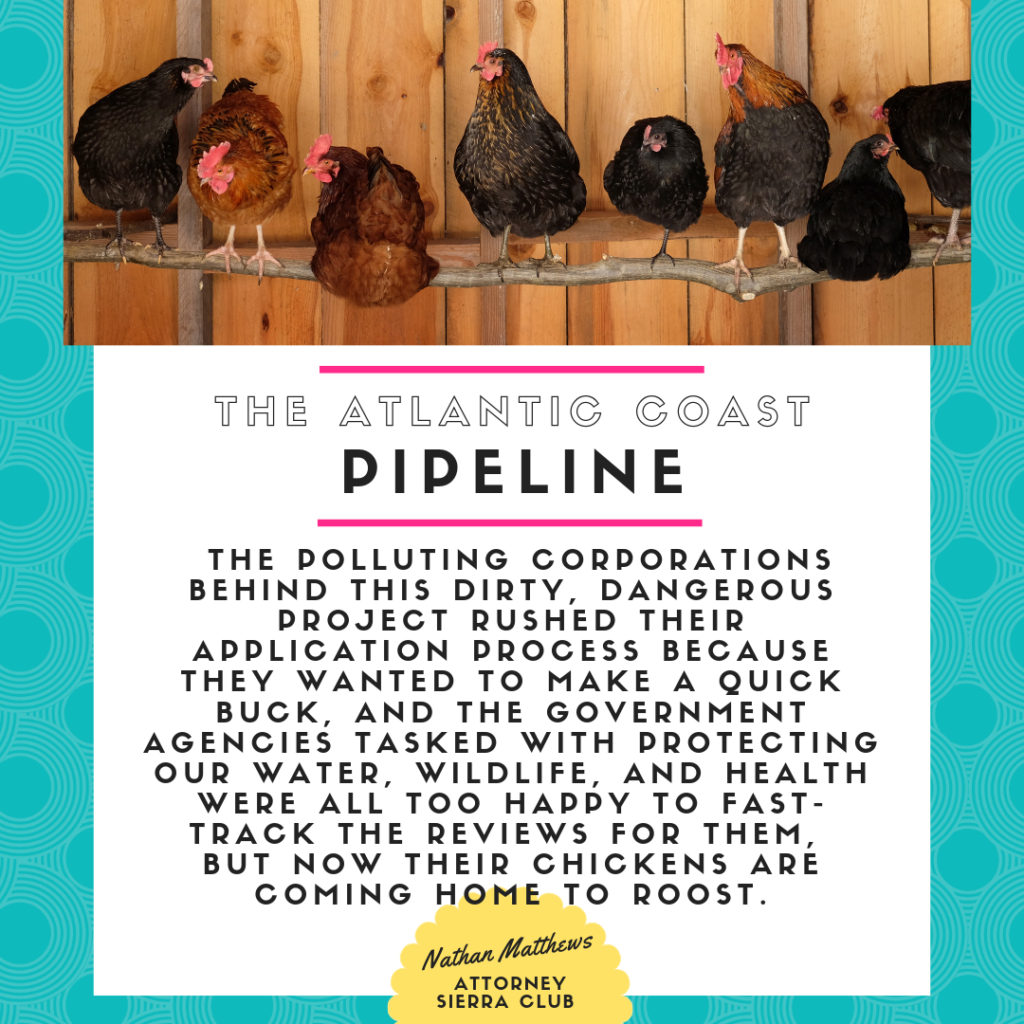 The Fourth Circuit of the U.S. Court of Appeals Friday struck down the latest permit the U.S. Fish and Wildlife Service (FWS) had issued for the the Atlantic Coast Pipeline (ACP). The issue arose from a requirement in the Endangered Species Act that (quoting from the decision) “the proposed pipeline will not jeopardize the continued existence of several endangered and threatened species that are likely to be impacted by pipeline construction. As relevant here, the Biological Opinion concluded that the pipeline will not jeopardize four species: the rusty patched bumble bee, clubshell, Indiana bat, or Madison Cave isopod.” The FWS issued an opinion in 2017 stating that the ACP did not endanger any endangered species. The permit was challenged in a lawsuit filed by the Southern Environmental Law Center (SELC) on behalf of the Defenders of Wildlife, Sierra Club and the Virginia Wildlife Committee (the latter two organizations being ABRA members).

In response to that legal challenge the Fourth Circuit in May 2018 vacated the FWS permit, which it explained in its opinion (not issued until August 6) that the “FWS’s vague and unenforceable take limits are arbitrary and capricious.” The agency reissued a new permit in September 2018, which was again challenged by the same plaintiffs. The Fourth Circuit stayed the new permit and, in response to that, the Atlantic Coast Pipeline, LLC suspended all construction of the project in late 2018.. The case decided Friday was argued on May 9, 2019 (see ABRA Update #229, May 10, 2019).

Specifically, Petitioners assert that FWS improperly determined that pipeline construction will not jeopardize the rusty patched bumble bee or the clubshell, and they challenge the validity of the take limits imposed for the Indiana bat and the Madison Cave isopod. Because we find that FWS arbitrarily reached its no-jeopardy conclusions and failed to correct the deficiencies in the take limits that we identified in the previous appeal, we grant the petition and vacate the 2018 Biological Opinion and Incidental Take Statement.

“In its rush to help this pipeline company, the agency failed to protect species on the brink of extinction – its most important duty. This pipeline would blast through some of the last populations of these rare animals,” said Patrick Hunter, attorney with the Southern Environmental Law Center. “There is no evidence that this pipeline is needed for anything other than Dominion and Duke Energy profits. For the sake of these rare species and its customers’ wallets, it’s time for these utilities to walk away from this badly planned boondoggle.”

Construction on the Atlantic Coast Pipeline has been stopped since December 2018 when multiple permits were called into question or overturned including permits from the Fish and Wildlife Service, National Park Service, Forest Service, and U.S. Army Corps of Engineers. Those permits are all still outstanding. Among the problems for this pipeline is a Federal Court decision that the Forest Service erred in allowing the pipeline to carve through national forests and was not authorized to allow the project to cross the Appalachian Trail. There is no clear path forward to construct the pipeline on its current route. The project is several years behind schedule and more than $2 billion dollars over budget. If constructed, ratepayers will be expected to pay for the pipeline while the energy companies collect a 15% profit.

Quoted in Charlottesville’s July 27, 2019, Daily Progress article, Dominion spokesperson Aaron Ruby said, “Based on the clear direction provided by the court in today’s opinion, we expect FERC and the Fish and Wildlife Service will be able to immediately begin working to correct the issues identified by the court. Once the new Biological Opinion and Incidental Take Statement are issued, we will seek the necessary approval from the Federal Energy Regulatory Commission to resume construction. We’re confident we remain on track to complete the project by late 2021.”

The Daily Progress article says, “If the Fish and Wildlife Service were to issue a new permit, Dominion has said it would begin building the pipeline from Buckingham County to the southeastern Virginia coast, connecting it to Hampton Roads and extending it through eastern North Carolina. The company plans to build a natural gas compressor station at Union Hill in Buckingham under a state air pollution permit that environmental groups also have appealed to the 4th Circuit. Separately, Dominion and its partners have petitioned the U.S. Supreme Court to review another opinion by the same federal appeals panel last December that threw out a U.S. Forest Service permit to allow the pipeline to cross beneath the Appalachian Trail between Augusta and Nelson counties.” 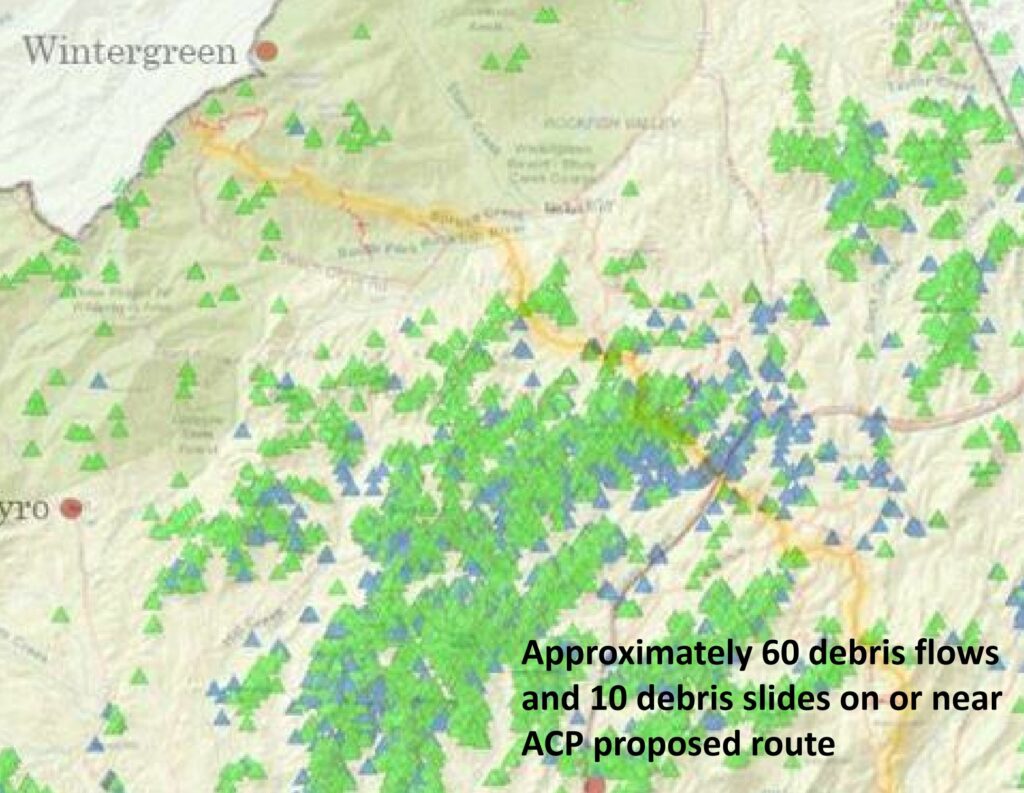 At the Friends of Nelson public meeting on June 30, 2019, Anne Witt, a Geohazards Geologist from the Virginia Department of Mines, Minerals and Energy, presented her work on a VDEM-FEMA Pre-Disaster Mitigation Grant Project. This project is to develop a risk assessment of landslides in western Albemarle and Nelson counties based on previous landslide events that occurred largely during Hurricane Camille. According to Ms. Witt, previous landslide locations are prone to having future ones.

The Grant Project consists of 4 parts or stages:

The project is presently in its first stage, so mapping is preliminary. However, LIDAR has revealed a larger number and a more accurate depiction of these previous landslides in Nelson County than seen before.

Friends of Nelson has overlaid the draft mapping of these landslides on the proposed Atlantic Coast Pipeline route. Doing so reveals how many of these slides are on or proximate to the route. Given the number and concentration of these debris flows, we feel that landowners and county officials should be aware of these past events in assessing future risk and mitigating it. Risk awareness is important given the immense amount of ground disturbance that would happen during pipeline construction and the significant potential for pipeline ruptures and explosions resulting from possible slide events afterwards.

In the figure above, approximately 60 debris flows (green triangles) and 10 debris slides (blue triangles) are on or near the ACP proposed route (in gold).

The figure below illustrates how LIDAR reveals the scope and path of previous slides that is not visible even with aerial photography in winter with no leaves on the trees.

See the short summary of Anne Witt’s talk here. Many thanks to Ms. Witt for sharing some of the slides from her fascinating presentation, and to Charlie Hickox for the summary and for the overlay showing the ACP route. 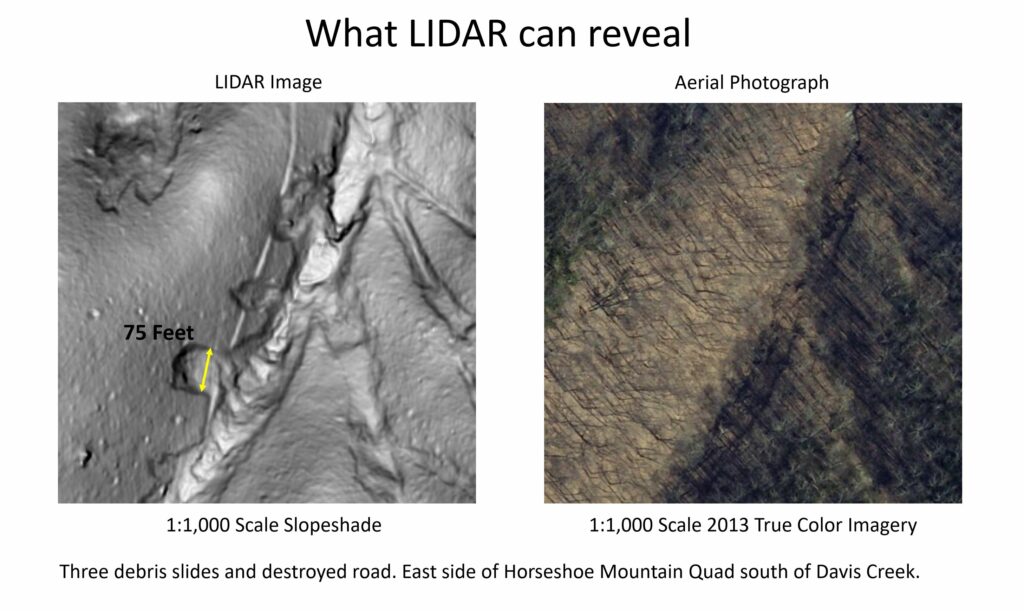