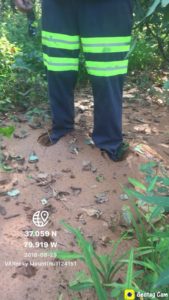 As construction on the Mountain Valley Pipeline ramps up again (although in some places it never actually ceased, despite the stop work order), citizen observers have and will continue to document the many and ongoing MVP violations of Erosion and Sediment Control Standards specified by the Virginia Department of Environmental Quality and its State Water Control Board.

For example, on-site in the same location that DEQ had recently inspected, the Virginia Pipeline Violations team encountered multiple, extensive mudslides, in some places thick, wet mud nearly a foot deep, washing from the construction area – in the same location where DEQ/MVP inspectors claimed on August 21 that there was no evidence of silt leaving the construction area. Concerned citizens relentlessly demanded that DEQ return, and on August 28 DEQ found violations on this location.