In March of 2017, Friends of Nelson, along with Friends of Wintergreen and the Wintergreen Property Owners Inc., released the results of a steep slope study that concluded that Dominion has understated the Atlantic Coast Pipeline’s landslide potential in Nelson County.  The study, which was conducted by Blackburn Consulting Services, LLC, analyzed the potential for slope failures and landslides in Nelson County from the proposed Atlantic Coast Pipeline, reviewed of Dominion’s in-house analysis, and concluded that “Dominion has not adequately identified those soils and landforms that are prone to debris flows (and) landslides.” The report also states that “the potential for debris flows in the very steep mountainous portions of Nelson County is underestimated by the reports submitted to FERC by Dominion.”  You can download the full study report by clicking here. 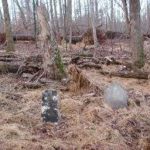 Landowners on the route!   Is Something Special on Your Property?

Do you have an old cemetery on your property? Evidence of Native American Artifacts? Old houses or historic buildings?

NOW is the time to call the Virginia Department of Historic Resources!

DHR staff will come out and do a preliminary evaluation of the historic resources on your land and will enter them in the State Database.

While “Get out Free” cards in pipeline land are hard to come by, historical and cultural artifacts on the route, like wetlands, rare species, and difficult terrain, make it harder for Dominion. We want these things documented as soon as possible (just not by Dominion!)

From the Commonwealth of Virginia Hazard Mitigation Plan, Page 10: “Landslide Risk to Energy Pipelines: Soil movement associated with landslides can destabilize the structural supports of

pipelines, possibly leading to pipeline ruptures. In Virginia, landslides can be expected to occur in conjunction with other hazard events such as flooding or earthquake, which also pose independent risks to pipelines (see section 3.7 and 3.13)” Look at the maps and photos.

As the regulatory process for the Atlantic Coast Pipeline progresses, it may be useful to become familiar with the Federal Energy Regulatory Commission’s regulations as to how it must implement the requirements of the National Environmental Policy Act. Those regulations are here.

A West Virginia Dept. of Environmental Protection Consent Order dated October 1, 2014 says Dominion’s pipeline construction projects in West Virginia have “caused conditions not allowable in waters of the State by creating sediment deposits” in numerous streams at numerous times. The proposed settlement is now out for public comment – complete with photos at the end of it, documenting Dominion’s sloppy construction. Remember that the EPA lists dirt (sediment) as the number one cause of pollution in our rivers and streams. Note the 6 pages of photos following page 11 of the document.  A Staunton News Leader article dated 11-28-14, Dominion in trouble for water pollution, says, “Dominion Transmission Inc. is being cited by the West Virginia Department of Environmental Protection for sediment pollution due to the Dominion G-150 pipeline, dating back to Oct. 2012…. Currently Dominion is looking to build a $4 billion 550-mile Atlantic Coast Pipeline from West Virginia to North Carolina, passing through Augusta County.” Why should we trust Dominion to install a 42″ pipeline without similar issues? Why should we believe Dominion when they say regulations ensure that our water will not be polluted? 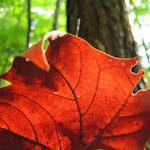 Thanks to Natural Nelson for this information! Rare species lists, from the Natural Heritage Division of the Virginia Department of Conservation and Recreation (DCR), are specific to Virginia and updated regularly. The linked page has a list of rare animals, rare plants, natural communities, and locality summary maps. There is a downloadable PDF of a rare species sighting form and instructions on how to let DCR know of a sighting and add to their database. (Photo of sycamore leaf in Nelson County by Maxwell Johnson. Sycamore is not rare, but it is lovely!)

Green Infrastructure Strategies for Nelson County Virginia. Prepared in 2010 by Students in the Green Lands Class at the University of Virginia School of Architecture. Green infrastructure is the interconnected network of waterways, wetlands, woodlands, wildlife habitats, and other natural areas that support native species, clean water and contribute to community health and quality of life. The report evaluates Nelson’s green infrastructure and proposed strategies for protecting environmental assets and landscape-influenced cultural resources. (106 page pdf)

Healthy Watersheds, Healthy Communities: The Nelson County Stewardship Guide for Residents, Businesses, Communities and Government. This 2011 stewardship guide provides Nelson County’s residents, businesses, communities and government with information on how they can use and manage local land resources to maintain, protect and restore local water quality and healthy watershed.

Historic Resources Identification and Assessment of Nelson County, Virginia.  Prepared by the Thomas Jefferson Planning District in 1993.  Properties were surveyed and historic and prehistoric sites evaluated for inclusion in the National Register of Historic Places and the Virginia Landmarks Register, and a preservations strategy was developed.  (196 page pdf)

1-21-15 Nelson County Times.  Owner of Historic Wingina Property Is Epitome of Pipeline Opposition.  “Rooted deep in nearly 300 years of rich family history, Andrew and Digna Gantt’s farm in Wingina has weathered wars, wealth, poverty and Reconstruction. It has been used as an Indian settlement, a plantation, and now as an unofficial area of conservation.”

1-19-15 WSET 13.  Nelson County Man Fights to Save Family History from Dominion Pipeline.  “A Nelson County man is fighting to protect his family history which lies in the path of Dominion’s proposed 550-mile pipeline.  In a quiet community in the heart of Wingina, Reverend James Rose opens the gates to the Peaceful Garden Cemetery.  It’s one of four known African American cemeteries in the Union Hill area…. Rose’s family cemetery sits on a former plantation deeded to his great-grandfather in 1887. The earliest marked head stone dates back to the ’30s but there are many unmarked graves that likely go back further.  ‘Our ancestors fought hard to keep it and they wanted us to continue on,’ said Rose.  So Rose has taken up a fight of his own against Dominion, to prevent the company’s 42 inch pipeline from cutting through a part of his history.  ‘To have them come in and try to disrupt part of it is ludicrous,’ said Rose.”

1-17-15 The Roanoke Times.  Dominion Pipeline Threatens Historical Sites, Landowners Say.  “Dominion Transmission, leader of a partnership that proposes to build the $5 billion, 554-mile Atlantic Coast Pipeline, is trying to thread its way through dense layers of history in a region settled first by the Monacan tribes hundreds of years before Capt. John Smith documented their presence in 1612, and then by plantation owners who relied on river commerce and slave labor to prosper.”

1-17-15 Richmond Times-Dispatch.  Dominion Weaves Pipeline Path Through History in Nelson County.  “Opponents contend the history will be impossible to avoid — from the African-American burial sites and former Monacan villages on the river lowlands to the architecturally rich Norwood-Wingina Rural Historic District, which the state recommended in the fall for nomination to the national and state registers of historic places.  ‘The point we are trying to make to both (federal regulators) and Dominion is that this entire area is too sensitive and significant for a pipeline to go anywhere near,’ said Janice Jackson, a Shipman resident who has been working with Rose to highlight the potential threat to the community’s history. ‘These are treasures, and they go back to the beginning of our nation,’ said Constance Brennan, a Nelson supervisor who is a leader in the fight against the pipeline.”

11-20-14 Daily Star (Oneonta NY): Pipeline road maps ignite local officials’ ire. A good point to make to FERC when writing letters … how in the world will our secondary roads and highways handle this? “Stop the Pipeline had argued that the FERC had insufficient information before it when it released the environmental impact statement, as it had no data spelling out how the large trucks would get to the work sites dotting the 124-mile pipeline pathway stretching from northeastern Pennsylvania to the Schoharie County town of Wright.”

10-20-14 ClimateProgress: Renewables And Efficiency Made Up 70 Percent Of The Drop In U.S. Emissions Since 2007 “Our analysis shows that it was the clean tech boom, not the fracking rush, that slashed the bulk of carbon emissions from the US power sector.”

9-30-14 Power for the People VA: Why Can’t I Buy Solar? “My local monopolist, Dominion Virginia Power, sells only one electricity product: a mix of coal, nuclear, and natural gas…. There are thousands of Virginians like me who want renewable energy and are willing to pay for it. If our utilities don’t want to build it, they should step aside and let customers do it.”

9-27-14 Washington Post: Nation rushes to embrace natural gas and fracking despite risks to environment – Robert McCarthey, columnist. “Virginia Gov. Terry McAuliffe’s attitude toward natural-gas ‘fracking’ seems to depend on whether it occurs somewhere that would be politically inconvenient for him.”

9-25-14 Virginia Native Plant Society: Giant Natural Gas Pipelines Proposed for Virginia.  “This broad scar in the landscape will cut through the Monongahela and George Washington National Forests and cross the Blue Ridge Parkway and the Appalachian Trail, cut through karst formations in the Shenandoah Valley, cross the historic James River in Nelson County as well as dozens of other smaller rivers, creeks and wetlands throughout the state. It will open up a major pathway for invasive species like Microstegium vimineum, (Japanese Stiltgrass) right across the state.”

9-24-14 National Geographic:  Switch to Natural Gas Won’t Reduce Carbon Emissions Much, Study Finds. Switching power plants from coal to gas will make us use more electricity and delay the dawn of renewables, a new study claims.

9-23-14 Marcellus Drilling News: Mariner East Pipeline Drilling Spills Mud in Local Creek. While drilling under a creek in PA, the drill bit hit “something solid” [like a rock?] that stopped the drill and caused “drilling mud, often called bentonite,” to leak into the creek as a grey sludge that traveled downstream. (Drilling mud is used to lubricate the drill.) “While non-toxic, a whole lot of bentonite in the water can, of course, suffocate fish and cause problems for wildlife that happen to drink it.” Why is this important? Dominion would be drilling under many, many creeks and streams in our area – all of which are Chesapeake Bay tributaries.

9-22-14 The Guardian:  Heirs to Rockefeller oil fortune divest from fossil fuels over climate change.  Heirs to Standard Oil fortune join campaign that will withdraw a total of $50bn from fossil fuels, including from tar sands funds.  This story also appeared in the New York Times on 9-21-14:  Rockefellers, Heirs to an Oil Fortune, Will Divest Charity of Fossil Fuels

9-19-14 Washington Post:  The coming era of unlimited – and free – clean energy.  “Inexpensive renewable sources will provide more energy than the world needs in less than 20 years.”    “We will go from debating incentives for installing clean energies to debating subsidies for utility companies to keep their operations going.”

8-29-14 Chesapeake Climate Action Network:  Appalachian Power Company Targets Two Solar Customers.  Appalachian Power wants to tax residential customers whose solar systems exceed 10kw in size (all two of them!).  APCo says they must tax the “free-riders” to recover the costs of the onerous task of providing power to the two customers on a part-time basis.

7-28-14 Mother Jones:  Natural Gas Is Not Going to Save the World. Why Gas is Unlikely To Be a Bridge to Renewables