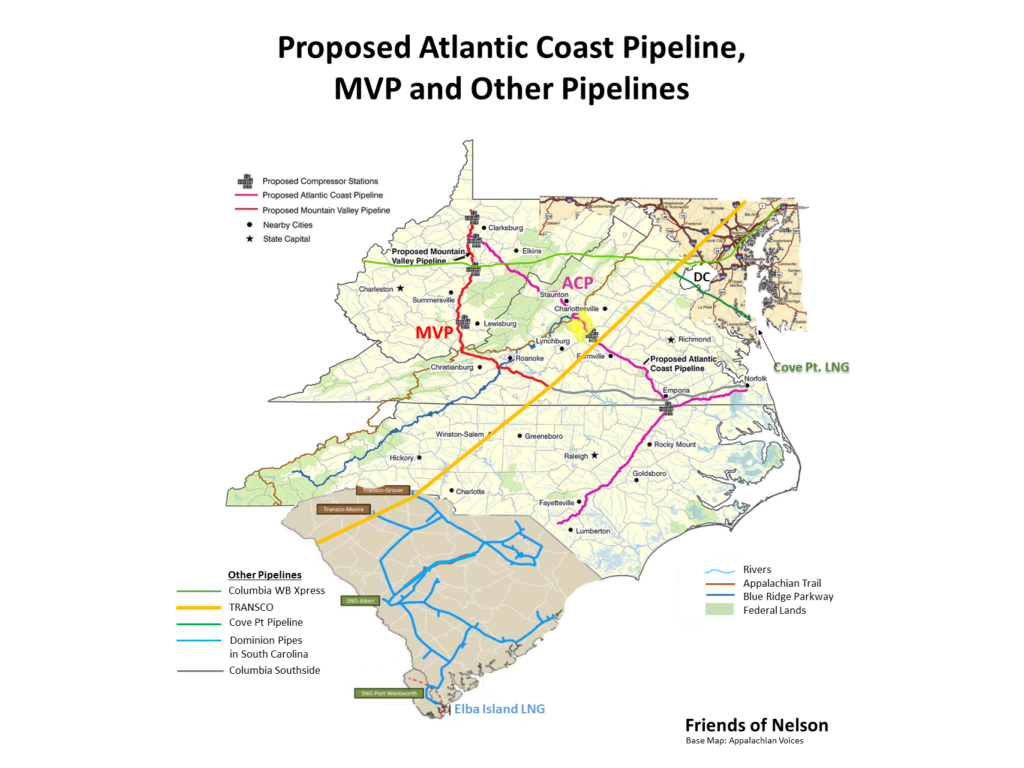 A new map, prepared in February 2020 by Friends of Nelson Board member Charlie Hickox, shows the routes of existing and proposed natural gas pipelines in our region. [Click the map to enlarge.] You can look forward to seeing a large version of this map displayed when we table at events and meetings.

The blue dots on the map (look for them along the orange line that is the pipeline route) are the water crossings.

A, AE, and X on the legend are FEMA designated Floodplain Areas. A & AE are the most dangerous part of Floodplains & any permanent structures are prohibited there…with or without Higher Standards. They are called Special Flood Hazard Areas (SFHA). 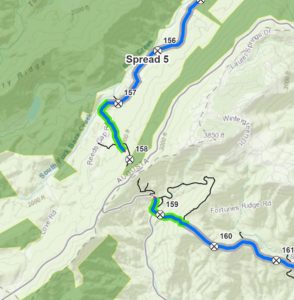 The map describes the proposed construction schedule for the proposed Atlantic Coast Pipeline through the mountainous counties of West Virginia and Virginia. The data was taken from Table 2.4-1 of the Final Environmental Impact Statement (FEIS), Volume 1, dated 7/21/2017. The Tree Felling Areas were taken from the table in the Supplemental Request and adapted to the ACP Route. Note that distances are approximate, as the route has changed since July of 2016, but the *Mileposts* have not! Thus, linear distances between mileposts are often significantly more or less than one mile, making it difficult to zero in on exact “stop/start” points. Note that tree felling is only authorized where Dominion has obtained easements. Tree felling has not been authorized for National Forest Lands.

Friends of Nelson Board member Ben Cunningham has created a set of 11 detailed maps showing the proposed ACP route through Nelson County. The maps show roads and waterways, with red dots indicating addresses. The proposed pipeline route is in orange, the additional pipeline work areas are in lime green, and the blast zone and evacuation zone are also indicated by shading on either side of the pipeline route. You can enlarge/reduce the maps using ctrl+/crtl- on your keyboard. Data is accurate as of the July 21, 2017, release of the Final Environmental Impact Statement from FERC.

Maps moving from west to east:

Friends of Nelson’s Ben Cunningham has produced an interactive map showing the ACP route through Nelson County. See the map here (21MB so it may take a few moments to load). The 125 foot clear cut ACP right of way is shown in orange, the 1100 blast radius zone in light orange, and the access roads in red. You can zoom in by clicking control-+. Where is your property on the map?

Dominion has proposed 206 miles of access roads for the western section of the Atlantic Coast Pipeline between Buckingham County, Va. and Harrison County, W.Va. Access roads can be as problematic as the pipeline itself and may be subject to even less regulatory oversight.

Will Dominion ask to build access roads on your property? Check one or more of the maps below.

Access roads are in yellow, pipeline routes in red and blue.

For more information, see Ground Truth about ACP Access Roads, another in the Dominion Pipeline Monitoring Coalition Story Map series. On the DPMC Story Map page, you can enlarge the map and scroll across Nelson County (or anywhere along the proposed route) to see where access roads are proposed. One of the largest crosses the Monroe Institute and Roberts Mountain towards the Davis Creek area, one of the areas most devastated by Hurricane Camille.

To look at access maps across the entire proposed route, see the supplemental ACP information filed in April 2016 with FERC, which includes topographic maps for temporary access roads to be built and used during construction. The file is large, but the Nelson route, moving west to east, is on pages 51-57 (these maps are listed separately above as Access Roads Maps #1-#6) Notice the length, number, and locations of the temporary access roads, and check to see if your property is affected. Also included are water impoundments which may indicate areas where they plan to drain our rivers and streams for hydrostatic testing and manual shut-off valves. Temporary work spaces are noted in light green, but difficult to spot in some cases. Free Nelson counted 25 temporary access roads in Nelson. FERC submittals and information from local landowners at the time indicated that in some cases private property owners were not notified of access roads crossing their properties.

Dominion has adopted two route variations in Nelson County. One straddles Hwy 29 and the other is in Horizons Village. They explicitly rejected alternatives crossing at Rockfish Gap and along Rt. 56. Read the entire filing, which includes maps, discussions of the alternatives, and their answers to archeological/cultural concerns on specific parcels.

Detailed route maps for our area are included in Resource Report 1, part 2 (topographic route maps) and part 4 (aerial route maps). Scroll down to the heading for “FERC Application – Sept. 2015.” Click on the + signs to expand the tables of contents. Listed below are the maps for our region:

Dominion has an interactive map of their possible route changes through Augusta and Nelson. You can access the map here. To find the potential alternatives, you have to play with the “layers” which is the symbol that looks like a stack of paper, which is in the row of symbols under the words “Atlantic Coast Pipeline” in the rectangular green box. Click on the “layers” symbol and then click to check Alternative Survey Corridor on the drop-down menu. You can enlarge the map (with the + and – signs on the top left corner) and move the map around by holding the right click button and moving your cursor. On this interactive map the original route is in yellow, and the potential alternatives are green.

An additional Dominion overview map (not interactive) may be found here.

The picture above shows the originally proposed pipeline path over the Blue Ridge into the northern Rockfish Valley and the picture below shows the alternate route over the mountains into the southern part of the Valley. Many thanks to Irene Volenick, who made these maps so we could visualize the paths better! More to come. 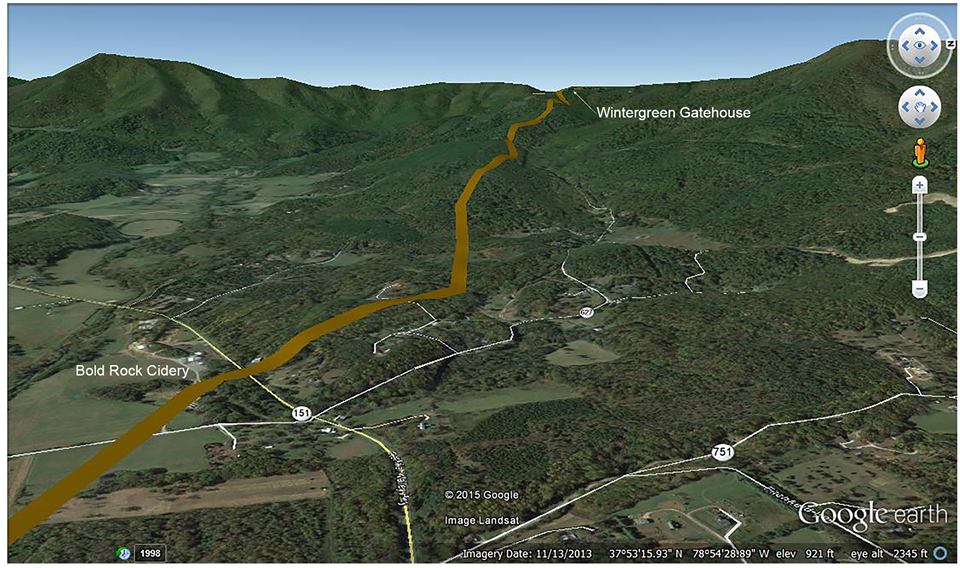 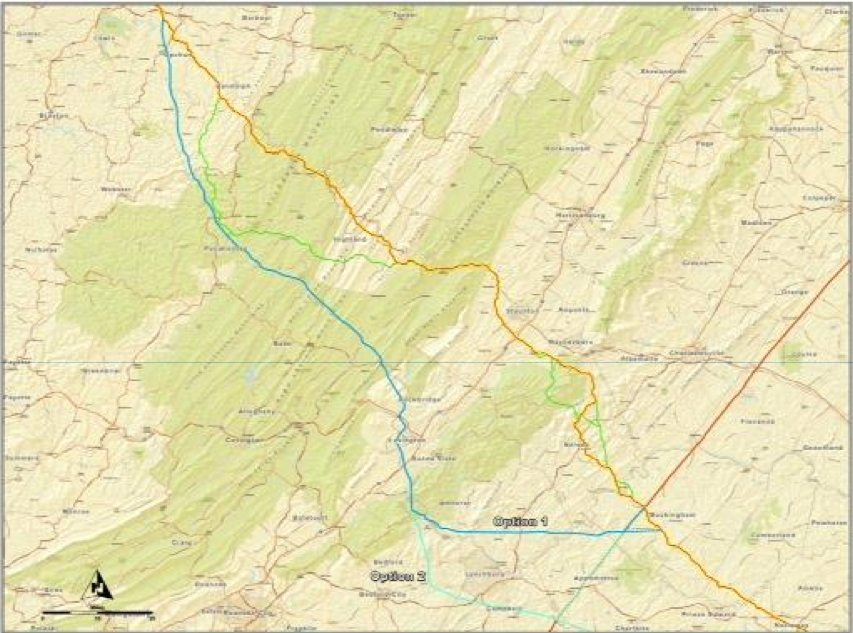 Natural gas pipelines in Virginia. (This website was developed originally for the Geography of Virginia class (GGS 380) taught at George Mason University. The material on this site is not in any way an official statement of the university. The official disclaimer from the state’s Use of Electronic Communications And Social Media is “views expressed on this website are my own and do not reflect the views of the Commonwealth of Virginia.” )