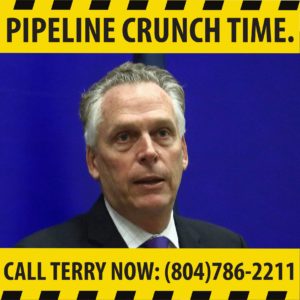 The November 12, 2017, Huffington Post asks, “Is outgoing Virginia Governor Terry McAuliffe a climate change denier?” It notes that just asking the question “is bound to offend the governor and some of his supporters,” who list his efforts to reduce emissions and his very recent return from the 23rd United Nations Climate Change Conference (COP23), where he signed a Memorandum of Understanding committing Virginia to reduce carbon emissions (after he leaves office) as part of the Under2Coalition.

But, the article continues, “Never mind that close observers have called McAuliffe’s record on climate change ‘abysmal’ and ‘marred by contradictions and empty rhetoric,'” that by joining in November 2017 Virginia came very late to the Under2Coalition, formed in May 2015 and already including 180 jurisdictions. And “never mind that McAuliffe has spent the past three years as the state’s biggest cheerleader for two massive and controversial fracked gas pipelines, that, according to recent estimates, will produce greenhouse gases equivalent to that produced by 45 coal fired plants or 158 million metric tons per year, more than doubling Virginia’s carbon footprint.”

The article goes on to discuss