Here’s a slide show of some of the wonderful signs anti-pipeline signs and banners displayed on Nelson and Augusta roadsides, at meetings, and at other events. Thanks to all for the many clever ways in which you have made opposition to the ACP visible.

Thanks to all the artists for sharing their songs and allowing us to post them!

I’ll Be Your Soldier, by Bobby Midnight of Trees on Fire.

“Freedom” and We Don’t Want Your Pipeline,” performed by Joe and Alda at the Friends of Nelson meeting, March 12, 2015, and RVCC.

“No Dominion Over Me,” by Gene and Gayla Mills. A protest song in response to the Atlantic Coast Pipeline and Dominion’s assault on the property rights of Virginia landowners.

No Nelson Pipeline – Thank you to Jesse Winchester and “The Brand New Tennessee Waltz” for the music and Tommy Stone of Cobblestone Music for the lyrics and singing.

“Letter from Home” by Elizabeth McCommon. Published on Feb 23, 2014, Elizabeth McCommon with Rob Northrup. “For the power company, it only loves one thing. That’s the sound of the cash register when it goes ching-a-ling.”

The 10-minute documentary ‘Pipeline’ about our pipeline fight will be ready soon …. it’s in New York City in the studio getting the finishing touches! Here’s a June 2016 teaser to get you started… stay tuned for info about its release.

A 3 minute about a West Virginia couple’s first hand experience “working with” Dominion installing a pipeline on their property. Watch Keely Kernan’s film, In the Hills & Hollows, documenting the natural gas industry in Doddridge County WV, the epicenter of gas wells and pipelines. This particular interview is a couple’s firsthand experience with Dominion and one of their pipeline construction projects. “They broke over half the items in the contract,” and caused chemical burns through their sloppy use of Bentonite “Quik Gel,” which is clay mixed with tiny particles of silica, or glass, used to keep moisture out of the pipes while they are laying them.

Arlo Bloom is a 14-year-old Nelson County resident who will be a 9th grader at Nelson County High School in September 2015. For his 8th grade end of the year school project he created an 18-minute documentary about the Atlantic Coast Pipeline and the issues concerning it. He has posted it on YouTube and would like to share it with the community. Please like, and share this with friends, family, etc. The more views and support the better! In the documentary, speaking about the ACP, Supervisor Connie Brennan says, “Young people really need to take this seriously because this is our land, this is our world, and we need all of you to stand up and say, ‘Hey! Hello! You’re leaving all of this to us! What can we do? What should we be doing? What do we want to see for the future?'” Many thanks to Arlo, who has has done a brilliant job of standing up and doing something!

If you didn’t have the opportunity to see the documentary Won’t Pipe Down at one of the recent showings in Harrisonburg, Charlottesville, or at RVCC, you missed a wonderful film, and we hope you’ll have a chance to see it the future. The short documentary presents the definitive David versus Goliath battle between the residents of Nelson County, Virginia, and Dominion Power. This inside look at our community and our fight against the Atlantic Coast Pipeline raises questions about environmental justice, property rights, and individual rights. Visit their Web page at http://wontpipedown.com/ for more about the film.

What started out as a class project for JMU students Abby Riggleman (the original northern route cuts through her family’s land), Art Pekun, Marley McDonald, and Danny McNew, has morphed into something far bigger and more successful. The first cut of the film won the documentary category at William and Mary’s Global Film Fest and got an Honorable Mention at the Broadcast Education Association’s film festival.

All Pain No Gain music video, “Faces of Pain,” features Nelson and Augusta County residents affected by the pipeline.

Julie Burns’ brother and sister-in-law, George McCollough and Anna Savoia, have made a wonderful video titled “No Pipeline, Say the Friends of Nelson.” You may recognize some of your neighbors in the 29 minute film.

This series of 6 recordings was made in June 2014 by Ms. Nelson County Landowner while talking with Mr. Dominion Right of Way Representative. Ms. Landowner asks questions, Mr. Representative provides some amazing (for lack of a better word) answers.

The Gas Pipeline: A review of why Dominion’s Pipeline has to be stopped, by John P. Flannery (jonflan@aol.com) Heidi Cochran appears in this video about Dominion’s proposed ACP! (Note: The narrator is incorrect when he says the Appomattox pipeline belonged to Dominion. It does not. It was a Williams pipeline.)

June 2016 – Poet Amelia Williams has found a way to leverage art as a direct blocking and delay tactic in the fight against fracked gas pipelines and compressor stations. Walking Wildwood Trail: Poems and Photographs is a book about an eco-poetry art trail created as a tactic against the proposed Atlantic Coast pipeline. A number of different literary agents have expressed an interest in her poetry so far, and Amelia is confident that the next poetry book she publishes might become her biggest seller yet. All proceeds from the book of poetry and photography documenting Amelia’s project benefit Friends of Nelson and Wild Virginia. The significance, she hopes, reaches everyone. Learn about upcoming readings and events on my writer’s page on Facebook. Find the book at Trager Brothers Coffee and Basic Necessities in Nellysford, Givens Bookstore and James River Yoga in Lynchburg. Or e-mail me and I will mail you a copy. You can pay using: PayPal.Me/AmeliaWilliams

1-21-15 Nelson County Times. Owner of Historic Wingina Property Is Epitome of Pipeline Opposition. A story about Nelson County residents Andrew and Digna Gantt and their 277-year-old historic property in Wingina, which sits in the path of the Atlantic Coast Pipeline. “Rooted deep in nearly 300 years of rich family history, Andrew and Digna Gantt’s farm in Wingina has weathered wars, wealth, poverty and Reconstruction. It has been used as an Indian settlement, a plantation, and now as an unofficial area of conservation…. Gantt is steadfast in turning down [Dominion’s] request to access his property…. when it comes to the passion of his family’s land and long history, Gantt said he would lay down in front of the bulldozers if the time comes. ‘I feel so strongly about this,’ he said. ‘It’s uncalled for and unjust. The pipeline is going through some 200 properties of people who have their lives established here. They can’t say no, it’s so hard to say no. It’s an enormous effort to say no.'”

1-21-15 Blue Virginia. Living in Dominion’s Sacrifice Zones. The story of John Ed and Ruth Purvis, a Nelson County family whose land lies in the path of Dominion’s Atlantic Coast Pipeline. The Purvis family has owned and farmed their land for seven generations.

1-15-15 Charlottesville Newsplex: Sherriff’s Wife Fighting for Her Life, and Her Land. “Dominion Resources has filed another round of civil lawsuits against landowners in Nelson County to gain access to their properties to survey for a natural gas pipeline. Sheriff David Brooks and his wife, Sherri, are one of the 59 families being sued by Dominion…. ‘Would you want this in your backyard or your front yard where your kids play, where your grandkids play?’ asked Sheriff Brooks. The proposed route for the five billion dollar pipeline carrying natural gas from Ohio and Pennsylvania, could run right through their property off James River Road. The land was once an apple orchard and has belonged to the Brooks family for three generations. ‘This land has value to us, more than just a monetary value,’ Sherri Brooks said.”

1-1-15 “The Deceived ‘god.'” Poem by Michael M. Barrick. A poem dedicated to Dominion Resources. “What is sacred to you / they curse.” “The old home place; / the sunrise over the ridge; / the moon hanging in the / deep blues of night. / The stars which pre-date / their / temporal, mortal / white-washed tombs, / they don’t even glimpse.” “The only green they see / is on currency.”

10-15-14 C-Ville: Long legacy: Family history fuels fight against pipeline in Nelson County. “In one pocket of southeast Nelson, a common history binds a particularly staunch group of pipeline opponents – and they say that history is a big part of why they want to see the project die.” The Rev. James Rose and his neighbor Pearl Miles talk about their rich local history, which may not have state or federal recognition, and how, as the last generation to grow up on the land like their parents and grandparents, they feel a responsibility to protect it.

Andrew Gantt tells the story of his historically significant parcel along the James in a September 15, 2014 letter to Dominion. 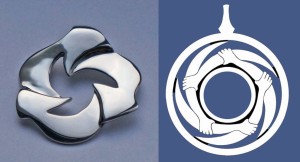 Art Pendants by K Robins: Nelson County artist K Robins has created two unique pieces of jewelry to represent Nelson County’s fight against the Atlantic Coast Pipeline. K will be donating all proceeds (beyond production costs) for these pendants to Friends of Nelson and its allies to support their work of opposing the pipeline and advocating for the residents of Nelson County. K says “The people in Nelson county are so inspiring to me! They are courageous, highly informed and have a contagious love of land, body and spirit!” Both pendants, Revolution (the piece on the left in the picture) and Solidarity (the piece on the right), are for sale now at K’s Etsy store.

LandEscapes, an Installation Artwork by Amelia Williams. Amelia Williams has created an installation art piece, comprised of art and poetry, on one 500 acre property that is on the direct path of the pipeline. The purpose of the artwork is to celebrate the varied terrains of the land and to build a protective web across the land so that federal copyright protection of the installation will have to be taken into consideration.