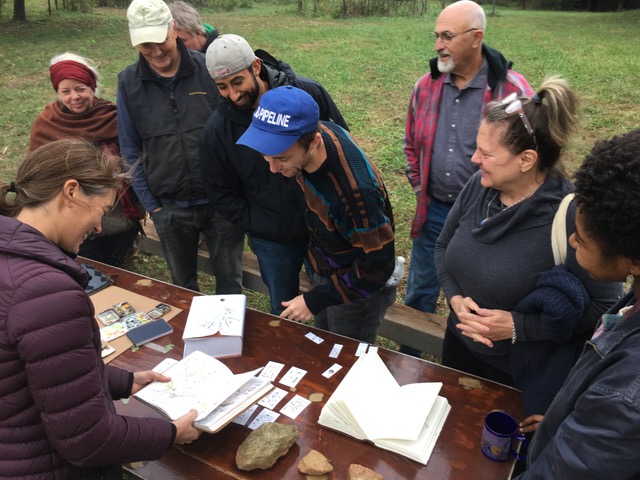 Activists opposed to the Atlantic Coast Pipeline (ACP) invited the public to camp on property in its path the first three weekends in October to learn why Nelson County residents are fighting to prevent its construction.

During the final weekend of camp, attendees heard talks and presentations from a number of Nelson County citizen experts, toured local properties that would be affected by the pipeline, and participated in workshops and discussions.

Host landowner and anti-pipeline activist Richard Averitt described the camp property and his family’s plans to build an eco-resort there. He led a tour of the site and showed the group the deleterious effects the ACP would have on the Spruce Creek waterbody. He also showed a slide presentation he recently gave to a Congressional hearing on how this destructive project has affected his family both on camp land and where his family has residences.

Charlie Hickox, Friends of Nelson board member, presented a brief history of Nelson and described the devastating effects Hurricane Camille had on the county, due to the intense rain and landslides that resulted in 124 Nelson citizens losing their lives. He emphasized that the unstable soils on our steep slopes, coupled with extreme precipitation events (brought on by climate change) have a high probability of failing again during or after construction of a 42” diameter pipeline. Such integrity failure would most likely result in explosions and fire due to the volatile nature of natural gas put under 1400 + psi pressure.

Joyce Burton, Friends of Nelson land owner liaison, described how individual properties in the immediate vicinity would be impacted by the pipeline. Effects include contamination of drinking water, wetland and stream bed degradation, ridgetop and old growth tree removal, the economic impact on a newly built country inn, and in one case, elimination of an entire residence due to the proximity of the ACP pipe to its septic and water systems.

In the afternoon Joyce hiked with camptivists up Robert’s Mountain to see just how steep one of these ridges that the pipeline is proposed to go though actually is. Participants got to see firsthand the narrow slope that would be significantly “reduced” in height.

Mike Tabony, local resident, school lecturer, and frequent writer of letters to the editor to local newspapers, gave a detailed slide presentation on Climate Change and Global Warming. One point he made was that increasing global temperatures result in catastrophic sea level rise with major implications for Virginia’s coast line, especially in the heavily populated Norfolk/Hampton Roads area where one segment of the ACP is proposed to end.

Lara Gastinger, an internationally recognized botanical illustrator and lead illustrator of the book, Flora of Virginia, presented a workshop on illustrating and journaling plants. Participants walked the Averitt’s property collecting plant materials and then sketched and painted them using fine point pens and watercolors.

Weston Mathews, Rector of Grace Episcopal Church in The Plains, Virginia and co-director of the Interfaith Alliance for Climate Justice (IACJ), gave an insightful talk on the necessity for action and collaboration beyond borders of Nelson County, expanding the notion of what it means to relate to someone as a neighbor. His IACJ organization generously funds Native Americans under duress due to climate events, bail for arrested protesters, and supports many other environmental justice organizations and activities.

Ben Cunningham from the Dominion Pipeline Monitoring Coalition (DPMC) presented and demonstrated the Pipeline CSI mapping application and made a request for volunteers to monitor and report violations of erosion controls and water quality protections found during pipeline construction.

Doug Wellman, vice president of Friends of Nelson, discussed local alternatives to gas and coal power generation. Roof top solar projects exist in the county on residences, schools and community centers. There are also solar alternative projects being done by the utilities and electric coops themselves, as well as many nearby commercial projects. The energy source profile is changing but many laws and regulations still need to catch up. Sadly, off-shore wind, a stable energy source in many European countries, is just now beginning to be implemented in Virginia. Doug reminded us that energy conservation remains an effective strategy, especially for low income residents who would directly benefit from paying smaller utility bills.

Ernie Reed, former president of Friends of Nelson and current member of the Nelson County Board of Supervisors, showed the group a recent Powerpoint presentation he made to Sweet Briar students. Later he discussed how the attendees could influence decision makers and the media in this fight, and the importance of continuing to mount legal challenges. He advocated having as many tools as possible to fight pipelines in order to preserve our environment and property rights.

Susan McSwain, a Nelson County master naturalist, led the group on a nature walk where she identified native and invasive plants.

The weekend camping events brought together people from Oregon, Wisconsin, West Virginia, North Carolina, and Maryland, as well as from many cities and counties in Virginia. Participants learned about Nelson County, its history, natural resources, beauty, susceptibility to landslides, and the vulnerabilities to its tourism businesses. Campers were briefed by our knowledgeable citizen task force on the lack of property rights, legal matters now in the courts, the deleterious effects of pipelines on local flora and fauna, and, finally, on the reasons why this project is totally unnecessary. Natural gas demand in the Commonwealth is flat and alternatives such as solar, offshore wind and conservation have become much more attractive and competitive. As Nelson has stated from the beginning of this struggle: No Pipeline.