The focus of the event is on the fact that this was done by ALL of us, that ALL the contributions large and small added up to the outcome.

This is our chance to say thank you to each other and to honor the connections we’ve built over the last 6-7 years, as well as to set an intention for the connections and community spirit we built to continue into the future, even in the absence of a “common enemy” like the ACP.

The celebration will be from 5pm-9pm on Saturday, July 10th at the Rockfish Valley Community Center and will include libations, musical entertainment, guest speakers, and even a food truck. 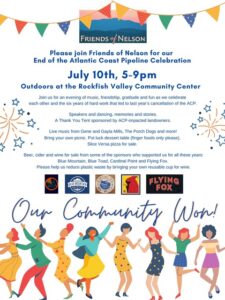 From the Roanoke Times

the city of Roanoke became the first Virginia locality to institute a 5-cent tax on single-use plastic bags at grocery, convenience and drug stores. The Roanoke ordinance will go into effect on Jan. 1st. A share of the revenue will help merchants implement the tax.

This is made possible by the General Assembly passing legislation just before the start of the COVID-19 pandemic, giving cities and counties the option to levy the disposable bag fee. The Code of Virginia states revenue must go toward environmental cleanup efforts, waste reduction education programs, pollution and litter mitigation initiatives, or the provision of reusable bags to Supplemental Nutrition Assistance Program (SNAP) or Women, Infants and Children Program (WIC) recipients.

300 million tons of plastic are generated each year across the globe and half of that volume is for single-use purposes. That’s roughly the weight of the global human population and items like bags often land in our rivers, oceans, streams and other waterways.

As of February, eight states had banned single-use grocery bags altogether, with limited allowances such as those distributed in produce, meat, deli and bulk food departments. Roanoke’s ordinance carries that same exception.

The company behind the Keystone XL pipeline announced on Wednesday June 9th that it’s officially scrapping the project after President Biden nixed a border-crossing permit for it.

TC Energy said that after “a comprehensive review of its options, and in consultation with its partner, the Government of Alberta, it has terminated the Keystone XL Pipeline Project.”

Biden argued that the proposed oil pipeline “disserves” the U.S. national interest and that “leaving the Keystone XL pipeline permit in place would not be consistent with my Administration’s economic and climate imperatives.”

ON JULY 5, 2020, THE ACP WAS CANCELED. WE WANTED A
REAL CELEBRATION, BUT THE PANDEMIC MADE THAT IMPOSSIBLE.

NOW MANY OF US ARE VACCINATED AND THE RESTRICTIONS
ON LARGE GATHERINGS HAVE BEEN LOOSENED.

JOIN THE FUN AND FELLOWSHIP—WE’VE EARNED IT! 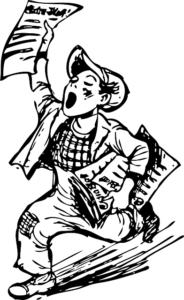 Recent post-ACP-cancellation news articles of interest. More detailed information on our In the News page.