Thank you for fighting the Atlantic Coast Pipeline with us.

When, on July 5th, Duke Energy and Dominion Energy abruptly cancelled the Atlantic Coast Pipeline, it didn’t come out of nowhere. For years, SELC and a broad coalition proved again and again that this project was unneeded and unwanted. Finally, those facts forced Dominion and Duke to make the only rational choice and cancel the project.

We’re so grateful to everyone who pitched in to fight this pipeline and create a cleaner future for our region. Thank you!

Click here to read more about SELC attorney and staff perspectives on the victory. 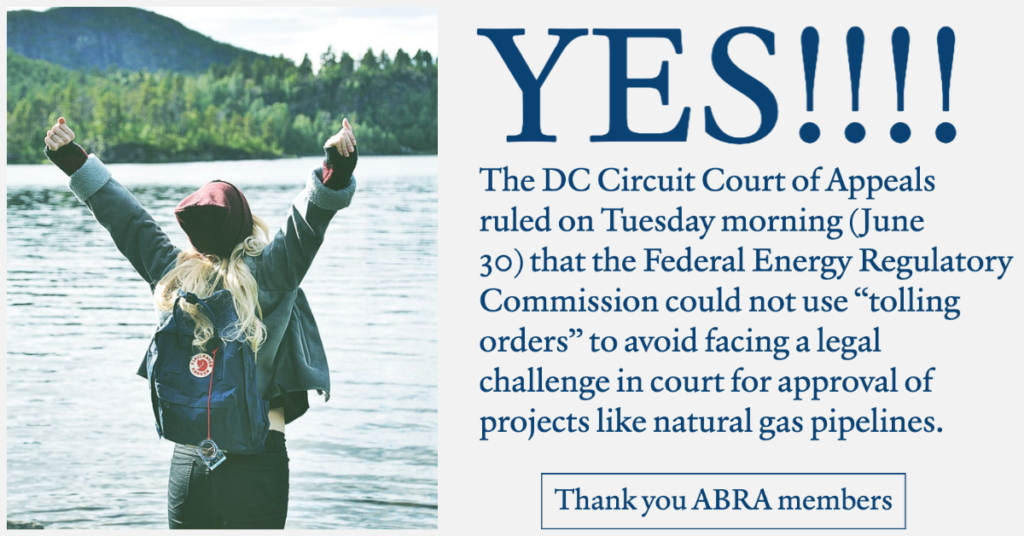 On Tuesday June 30, 2020, the DC Circuit Court of Appeals ruled that the Federal Energy Regulatory Commission could not use “tolling orders” to avoid facing a legal challenge in court for approval of projects like natural gas pipelines. The decision came in the case involving the Atlantic Sunrise Pipeline, Allegheny Defense Project, et. al. v. Federal Energy Regulatory Commission. Several ABRA members (including Friends of Nelson) filed a brief in the case.

The majority opinion, written by Judge Patricia Millett on behalf of all the active judges on the DC Circuit, said: “…we hold that, after thirty days elapsed from the filing of a rehearing application without Commission action, the Tolling Order could neither prevent a deemed denial nor alter the jurisdictional consequences of agency inaction. To the extent our prior decisions upheld the use of tolling orders in that manner, they are overruled in relevant part.”

Tolling orders allow FERC to put off responding to requests for a rehearing, thus blocking challengers from bringing their concerns to court, while still allowing construction on pipeline projects to move forward. The ruling means that although FERC is not required by the decision to decide a rehearing request within the 30 days it must stick to the mandated 30-day time frame to decide on whether to accept a request for rehearing.  If FERC does not act on a rehearing application within thirty days, it means the request for a rehearing can be deemed denied and the applicant may then go straight to court to obtain judicial review of FERC’s action. 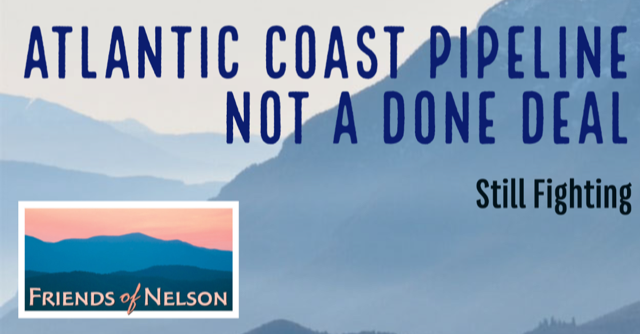 On May 28, 2020, the Ninth Circuit Court of Appeals denied the request by the Army Corps of Engineers, Transcanada Keystone Pipeline, and other pipeline companies to reinstate Nationwide Permit 12 (NWP12). This means NWP 12 will remain invalid while the Ninth Circuit considers whether the Montana district court correctly ruled that the Corps violated the Endangered Species Act.

The District Court’s April 15 ruling came in a case challenging the NWP12 permit for the Keystone project and was extended to affect permits for other new oil and natural gas pipelines. The ruling impacts the Atlantic Coast and Mountain Valley Pipelines, neither of which currently have valid NWP12 permits. At this point, the Corps cannot authorize either the MVP or the ACP to use NWP12 unless and until the Ninth Circuit reverses the Montana district court’s determination that the Corps violated the Endangered Species Act.

The Ninth Circuit Court of Appeals has been urged to uphold a Federal District Court in Montana’s ruling prohibiting the U.S. Army Corps of Engineers’ Nationwide Permit 12 (NWP12) program from issuing new permits for oil and natural gas pipelines. The District Court’s April 15 ruling came in a case challenging the NWP12 permit for the Keystone project and was extended to affect permits for other new oil and natural gas pipelines. The ruling impacts the Atlantic Coast and Mountain Valley Pipelines, neither of which currently have valid NWP12 permits.

In a May 20, 2020 brief filed with the Court, the Northern Plains Resource Council, a Montana-based conservation group, argued that Army Corps had failed to evaluate the cumulative impact on endangered species of all projects under the NWP12 and that the agency should have completed a programmatic review under the Endangered Species Act before reauthorizing the program for a five-year term beginning in 2017. The case is before the Ninth Circuit on appeal by the Army Corps and industry groups that are asking the Appeals Court to overturn the District Court’s freeze of the NWP12 program until the case is decided the issues. For a copy of the brief, click here.

Atlantic Coast Pipeline, LLC (ACP, LLC) has finally submitted a response to the January 7 decision by the Fourth Circuit Court of Appeals to vacate the Buckingham compressor station. ACP, LLC made recently two supplemental information submissions to the Virginia Department of Environmental Quality (DEQ), each responding to different issues raised by the Fourth Circuit.

An April 24 submission to DEQ responded to the issue of “why electric turbines are not required to be considered in Virginia’s BACT [Best Available Control Technology] analysis of the Compressor Station.” The company’s April 30 submission addressed the Court’s concern about “conflicting evidence in the record, the particular studies it relied on, and the corresponding local character and degree of injury from particulate matter and toxic substances threatened by construction and operation of the Compressor Station.” It is uncertain when the matter will be taken by the Virginia Air Pollution Control Board, as that body has not yet scheduled a meeting to reconsider the project’s air permit.