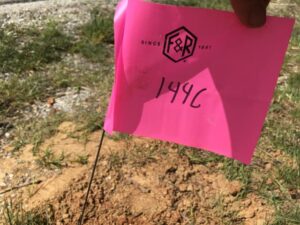 Just a heads up to citizens and visitors of Nelson County: in recent days F & R workers have been drilling “core samples” and leaving behind some new survey flags at various locations where ACP proposes to cross Nelson’s roads. Rte 29, Rte 151 and Beech Grove Road are among the locations where citizen monitors have reported this activity, and we expect ACP will probably do this at many, if not all, of the proposed road crossings in the coming days. Please note that we are aware of this activity and are keeping a watchful eye. This is ACP doing further geotechnical studies, not ACP starting to do the actual drilling/construction under our roads.

If you see something noteworthy or something that concerns you, please alert Allegheny-Blue Ridge Alliance’s Compliance Surveillance Initiative (CSI) program by calling 877-Go2ABRA, by emailing CSI@abralliance.org.

On Thursday July 5, 2018, the Virginia Supreme Court delivered a 6-1 decision in Atlantic Coast Pipeline v. William Barr, et al, upholding, for the third time, a much-debated state law allowing natural gas companies to enter private property without landowner permission to survey possible routes for new pipelines. The case, brought by Barr and five other landowners in Nelson County, opposed the ACP’s use of the law to survey for the proposed pipeline route across their properties.

Writing for the majority, Justice Cleo E. Powell said the General Assembly clearly intended “to grant natural gas companies access to private property for the purpose of conducting certain activities related to the possible construction of a natural gas pipeline.” Justice Arthur Kelsey’s strong dissent challenged the 2004 law’s central premise, saying the ruling turns private property rights upside down. “It subordinates the ancient common-law rights of private property owners to the commercial interests of a pipeline company that is under no legal requirement to enter onto another’s land.”

Press coverage of the ruling in the Charlottesville Daily Progress is here. 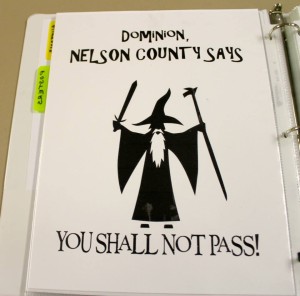 On Wednesday May 2, 2018, Doyle surveyors were observed on land specifically NOT permitted for survey access.

The petition for access is still in court and nothing has been granted. To access the property they also used roads marked “no ACP access” and where no permission has been granted. Doyle was approached and reported they were told by ACP that all permissions had been received. The surveyors were told that they had been misinformed and left the property. This occured in the Rockfish Valley. BE ON THE LOOKOUT!

Delegate Chris Hurst, Delegate Sam Rasoul, and Senator John Edwards held a joint press conference on January 11, 2018, to discuss legislation they’ve introduced to the 2018 Virginia General Assembly aimed at protecting water quality and landowner rights from the construction of fracked-gas pipelines, such as the proposed Mountain Valley and Atlantic Coast pipelines. The bills would require the Department of Environmental Quality to perform robust water permitting and impact review, and restrict the ability of pipeline companies to access private property,

The bills are (click on the links to see the full bill):

At a hearing on September 11, 2017, Franklin County Circuit Court Judge William Alexander granted the injunction sought by Mountain Valley to prohibit interference with their surveying of Four Corners Farm in Franklin County. The family that owns and operates the farm, David and Betty Werner, their daughter, Carolyn Reilly, and her husband, Ian Reilly, have been repelling surveyors since May of 2016.

The judge said, “I think this whole statute is a legislative failure, frankly,” but that he felt compelled to enforce it.

Surveying will likely be over three days next week.

“The bottom line for me is that money talks,” Carolyn Reilly said. “It’s another win for money.”

Read the full Roanoke Times article about the hearing.

On August 22, 2017, the Virginia Supreme Court agreed without argument to hear on appeal the survey suit against Atlantic Coast Pipeline LLC brought on behalf of six Nelson residents by Lollar Law.

Chuck Lollar says, “We believe the Virginia Supreme Court granted our Petition for Appeal without oral argument from us (replying to the opponent’s brief in opposition) because they feel that a significant issue of first impression under Virginia law has been presented, which the full court needs to address. The survey statute has been directly challenged as authorizing an unconstitutional taking, along with its interpretation by the trial court reading ‘and’ as ‘or’. The granting of our petition without argument when less than 10% of cases argued have writs granted by the Virginia Supreme Court is very encouraging. The ultimate decision by the full Court on the unconstitutional taking issue presented by the survey statute will have a major impact upon Virginia private property rights, which the appeals in two recent Supreme Court opinions failed to address.”