The most comprehensive data on abandoned pipelines comes from Canada. In the 1980s, the Canadian government began an extensive study of abandoned pipelines, which identified a slew of serious risks to leaving them in place. Sinkholes could form as pipelines corroded and collapsed. Leftover fossil fuels, or the cleaning agents used to clear out lines, could leak out into the surrounding soil or water. Aging lines under lakes or rivers could carry water where it’s not wanted. Empty pipelines could also become slightly buoyant, relative to soil, and rise to the surface, where landscaping and signage marking a pipeline’s path is rarely maintained after it has been retired. It is not sure as to how the valving system of the pipelines have been in place, or whether the Butterfly Valves of the pipeline are still intact to keep them from spilling.

Friends of Nelson cites statements by Atlantic that it does not intend to voluntarily release the easements, and has not ruled out transferring the easements to another party, saying only “it has no plans to do so at this time.” “These easements represent a severe, continuing, and — in the wake of the project’s cancellation — a totally unwarranted burden on the properties along the Pipeline’s 604-mile route,” the comment letter to FERC says, adding, “With no ‘public use’ justification remaining, FERC must ensure that landowners’ full property rights are re-stored.”

The comment letter says Atlantic and FERC bear joint responsibility for the “zombie easements,” so-called because the easements live on even though the pipeline proposal is officially dead. FERC bears responsibility because it awarded the essential certificate of “public convenience and necessity” that opened the door to Atlantic’s use of eminent domain. Faced with powerful corporations with huge financial and legal resources, most landowners felt forced to grant easements rather than take their chances in court. Atlantic is owned by Dominion Energy, Inc. and Duke Energy Corporation, two mega-corporations.

“By remaining in place even after the cancellation of the project, these easements burden landowners’ ability to use or sell their property—and also their peace of mind, due to the threat that Atlantic could someday transfer the easements to the developer of another project” the comment to FERC states.

Friends of Nelson has researched the more than 250 easements and easement modification agreements that were filed at the Nelson County Courthouse between October 2015 and July 2020. “The owner is prohibited from doing many things within the Permanent Easement,
including, but not limited to erecting structures such as a house or barn, planting
trees and moving earth. These prohibitions continue forever, even though the pipeline will never be built,” the Friends of Nelson letter to FERC says, and it cites specific examples of Nelson County landowners’ agreements that constrain the use of their land.

The Friends of Nelson’s letter to FERC asks the agency to order Atlantic to contact all owners along the pipeline’s entire 604-mile route to inform them that Atlantic will release the right-of-way easement within 90 days of a written request from an affected landowner.

Friends of Nelson’s request was filed on March 3. A full copy of the letter can be viewed here.

In a news release on June 9, 2020, the Federal Energy Regulatory Committee announced an amendment to its regulations which says that even if a project has all other certifications and permissions to begin construction, it must wait to do so until the Commission either acts on the rehearing request or the 30-day time limit passes with no requests for rehearing.

When FERC issues a certificate of public convenience and necessity, allowing a project to proceed, affected landowners have the right to ask FERC to reconsider. Although FERC is supposed to respond to such requests within 30 days, it frequently issues a “tolling order,” which indefinitely extends FERC’s deadline to respond. FERC thus freezes the landowner’s request for a hearing while allowing pipeline companies to continue construction – meaning that by the time a landowner has a hearing the pipeline construction may be completed.

According to FERC Chair Neil Chatterjee, quoted in the press release, “‘The Commission has undertaken a number of initiatives to improve affected landowners’ access to a fair and transparent process and today’s effort is another important step forward,’ Chatterjee said. ‘These are complex issues, with a diverse array of stakeholder input, but I remain firmly committed to doing what we can to make the FERC process as fair, open, and transparent as possible for all those affected while the Commission thoroughly considers all issues.'”

However, FERC did not define what it meant by “begin construction,” and could still allow pipeline companies to condemn property before FERC makes a decision on a landowners appeal, and, depending on the definition of “begin construction,” go forward to cut down all the trees, dig the trench for the pipeline, spray herbicides, cross waterbodies – everything but actually put the pipe in the ground.

FERC has been under mounting pressure from landowner rights advocates and from Congress to address inequities in its hearing process for affected property owners. 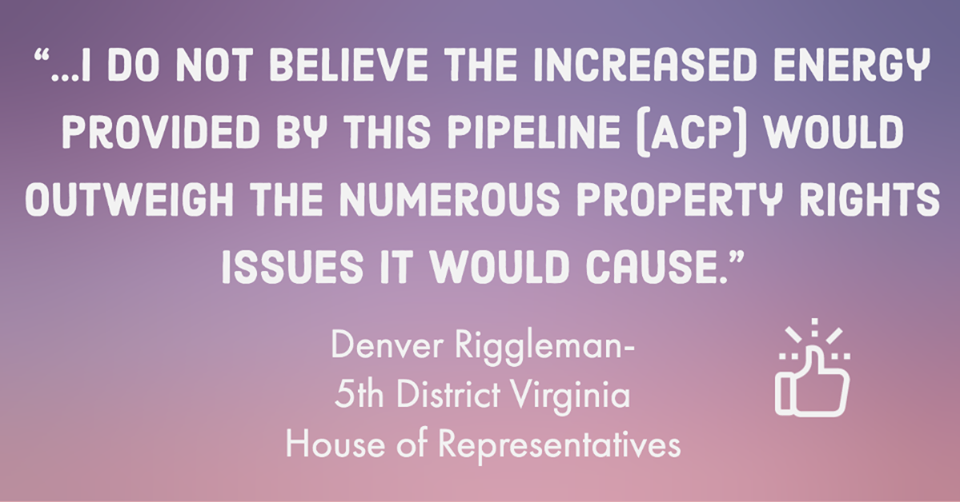 Keep voicing your opinions! In a March 30, 2020 email reply, sent from the office of Representative Denver Riggleman to a constituent, he writes,

“Thank you for reaching out to my office regarding the Atlantic Coast Pipeline. It is an honor to represent the people of Virginia’s Fifth Congressional District, and I appreciate the opportunity to learn your thoughts on this issue. As an avid outdoorsman, and landowner of an area within proposed pipeline construction, this issue is of top concern to me.

“The Atlantic Coast Pipeline is a natural gas pipeline intended to provide energy and heating to thousands of residents in the lower part of the 5th District all the way into North Carolina. While the pipeline would provide many benefits to the district, it would also cross hundreds of miles of private property and National Park land. Personal property must be adequately compensated under eminent domain, and only enacted when necessary. I also do not believe the concerns of private citizens have been adequately addressed during the construction process, especially concerns relating to imminent [sic] domain and quick takes. For these reasons, I do not believe the increased energy provided by this pipeline would outweigh the numerous property rights issues it would cause.

“I hope that you and other Virginians will continue to share with me on these important issues as citizen participation is vital for a transparent and functional government. Thank you for your dedication to preserving this nation’s representative institutions….” 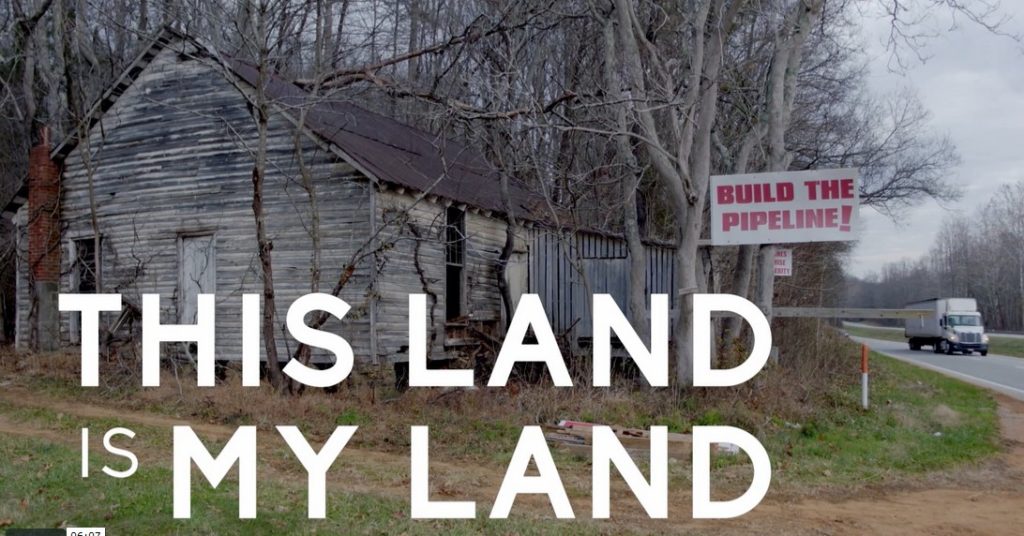 Click here for the 6 minute video, This Land Is My Land, directed by Sebastian Mlynarski and Rachel Fleit, who hope to produce a feature-length documentary.

Two press statements on January 3, 2020, one from Protect Our Water, Heritage Rights (POWHR) and the other from Gentry Locke attorneys, announced the filing by landowners of a constitutional challenge against FERC and Mountain Valley Pipeline under the federal non-delegation doctrine.

The POWHR statement says in part, “Plaintiffs have brought a facial constitutional challenge under three counts, alleging that any and all certificates already issued under the Natural Gas Act are void. Plaintiffs are seeking a declaratory judgment from the U.S. District Court in Washington, D.C., asking the Court to declare that Congress’s overly broad delegation of legislative powers to FERC was and is facially unconstitutional; that any delegation of eminent domain power to any and all private actors, including MVP, is facially unconstitutional; that FERC has no authority to issue certificates to applicants seeking to invoke the power of eminent domain to take property; and that all such certificates already issued are void ab initio.”

“The Complaint is a facial constitutional challenge, which raises three Counts.

As a result, Plaintiffs are seeking a declaratory judgment declaring that FERC has no authority to issue certificates and that all such certificates already issued are void.”

Russell Chisolm, Co-Chair of Protect Our Water, Heritage, Rights, commented, “We are encouraged that landowners may have a real opportunity for judicial consideration of their claims challenging the constitutionality of delegating Congressional powers to separate entities. The process as it stands has allowed FERC and private corporations to use the extraordinary power of eminent domain to seize property by force from landowners—a process that has continued even in the face of a multitude of missing permits, several pending lawsuits, and the absence of true public need for the Mountain Valley Pipeline.”