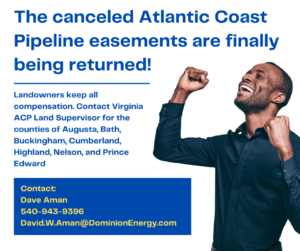 Happy new year! We are pleased to share with you this article in the Nelson County Times recently about the return of landowner easements on the canceled Atlantic Coast Pipeline.

Dominion Energy has agreed to return all easements to landowners. Landowners will keep all compensation.

For two and a half years the Niskanen Center, along with Joyce Burton (landowner liaison for Friends of Nelson) helped to turn this tide. This effort included a year-long partnership with Senator Tim Kaine’s office.

If you are a landowner on the canceled ACP route and want an expedited release (for example if you have plans for the property or you want to sell) please see the link below to contact the land agent in your area.

Please note that your land agent may be different than the one you initially worked with. For all counties on the ACP route see the link here for your land agent.


Together we are stronger!

As the holiday season is upon us, we are pleased to share some good news with our community!

The ACP easement release situation has changed dramatically since Aaron Ruby’s January 2021 statement to the Associated Press that ACP did “not intend to voluntarily release the easements.”

Despite FERC’s refusal to hold ACP’s feet to the fire on the easement/land use issue, in Nelson and Augusta courthouses, we are now seeing easement releases being filed for the individual landowners that participated in a year-long, focused advocacy initiative that included invaluable intercession by Senator Kaine’s office.

Even better, it looks like ACP may FINALLY be committing to what we have been asking for all along:  release ALL of the easements! The ACP website now states “For properties that do not require any restoration work, we are developing a plan to coordinate with landowners to release their easements.”

Although ACP is STILL not offering landowners with undamaged properties specific “how to” instructions to follow in order to get released — except to “keep waiting” — this statement is better than what their site had posted in early November. It is our hope that a turnkey process will follow quickly.

But our work is not over yet. Now we need to ensure ACP actually lives up to this commitment. We will continue to work to find ways to get the word out to landowners so that they will know release is finally happening and can follow up with ACP as appropriate.  (As we all know, ACP does not have a good track record re diligent follow-up when it is only the landowners who stand to gain from that effort.)

Please feel free to spread the word through your networks!

Together we are stronger,

2021 has been a year devoted to exploring new ways Friends of Nelson can serve Nelson County. After six long years of battling the misbegotten Atlantic Coast Pipeline proposal, our steering committee members and volunteers are ready for a change of pace and focus.

Our first priority for 2021 was finishing up the pipeline battle and doing what we could to help other citizen groups in their struggles against unwanted pipelines. We prepared an archive of our efforts and experiences; sought to get Dominion to release easements extracted through threats of eminent domain; and are preparing several different resources through a ‘Lessons Learned’ project intended to help other grassroots pipeline fighters to get started quickly and organize effectively.

Looking to the future, we examined projects aimed at preserving and enhancing Nelson County’s environmental quality and the enterprises, ranging from farming to tourism, that depend on it. Interests to be further developed include practical ways in which Nelson County can become a leader in climate and environmental action. For details see our annual report.

We anticipate some departures from the steering committee, so we are eager to hear from anyone who might be interested in serving. If you think you’d like to put your shoulder to the wheel, please contact any of the current committee members you may know or Doug Wellman at: wellman.doug@gmail.con or 434-964-8307.

Our annual meeting is scheduled for Sunday, January 23, 2022. Due to continuing COVID challenges, it will be via Zoom. The meeting link and passcode is below.
We look forward to seeing you!

It’s been just over a year since Dominion and its utility partners announced they were scrapping plans for a pipeline to carry natural gas from the fracking fields of West Virginia through Virginia to North Carolina. Opponents were thrilled, but the fight isn’t over yet.

The most comprehensive data on abandoned pipelines comes from Canada. In the 1980s, the Canadian government began an extensive study of abandoned pipelines, which identified a slew of serious risks to leaving them in place. Sinkholes could form as pipelines corroded and collapsed. Leftover fossil fuels, or the cleaning agents used to clear outlines, could leak out into the surrounding soil or water. Aging lines under lakes or rivers could carry water where it’s not wanted. However, the chances of this happening could be minimized by using safety precautions, like equipping pipelines with Double Block and Bleed Valve or similar devices that can prevent leakage. Likewise, the government might want to pay more attention to this as there could be a disaster in case of a leak. Empty pipelines could also become slightly buoyant, relative to the soil, and rise to the surface, where landscaping and signage marking a pipeline’s path is rarely maintained (by thorough inspection and regular updation using good quality Industrial Valves and other additional pipeline parts) after it has been retired. There can never be a replacement for regular and timely maintenance, which can prevent problems and also, increase the efficiency and longevity of the pipeline. However, it is not sure as to how the valving system of these pipelines have been in place, or whether the Butterfly Valves of the pipeline are still intact to keep them from spilling.